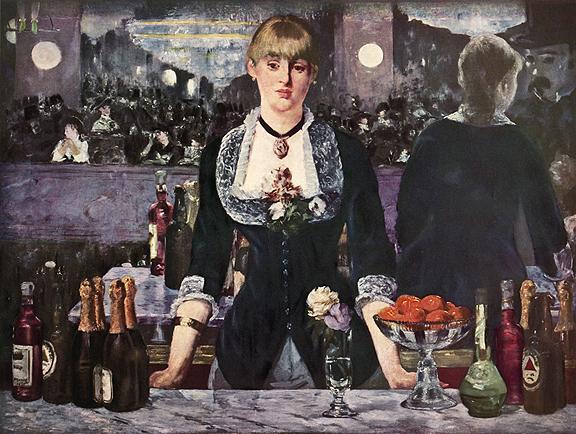 [1]
A Bar at the Folies-Bergere by Manet

Once a hall for operettas, pantomime, political meetings, and vaudeville, the Folies Bergère in Paris introduces an elaborate revue featuring women in sensational costumes. The highly popular “Place aux Jeunes” established the Folies as the premier nightspot in Paris. In the 1890s, the Folies followed the Parisian taste for striptease and quickly gained a reputation for its spectacular nude shows. The theater spared no expense, staging revues that featured as many as 40 sets, 1,000 costumes, and an off-stage crew of some 200 people.

The Folies Bergère dates back to 1869, when it opened as one of the first major music halls in Paris. It produced light opera and pantomimes with unknown singers and proved a resounding failure. Greater success came in the 1870s, when the Folies Bergère staged vaudeville. Among other performers, the early vaudeville shows featured acrobats, a snake charmer, a boxing kangaroo, trained elephants, the world’s tallest man, and a Greek prince who was covered in tattoos allegedly as punishment for trying to seduce the Shah of Persia’s daughter. The public was allowed to drink and socialize in the theater’s indoor garden and promenade area, and the Folies Bergère became synonymous with the carnal temptations of the French capital. Famous paintings by Édouard Manet and Henri de Toulouse-Lautrec were set in the Folies.

In 1886, the Folies Bergère went under new management, which, on November 30, staged the first revue-style music hall show. The “Place aux Jeunes,” featuring scantily clad chorus girls, was a tremendous success. The Folies women gradually wore less and less as the 20th century approached, and the show’s costumes and sets became more and more outrageous. Among the performers who got their start at the Folies Bergère were Yvette Guilbert, Maurice Chevalier, and Mistinguett. The African American dancer and singer Josephine Baker made her Folies debut in 1926, lowered from the ceiling in a flower-covered sphere that opened onstage to reveal her wearing a G-string ornamented with bananas.

The Folies Bergère remained a success throughout the 20th century and still can be seen in Paris today, although the theater now features many mainstream concerts and performances. Among other traditions that date back more than a century, the show’s title always contains 13 letters and includes the word “Folie.”

For more on the Folies, visit wikipedia.org [3]

For more about Manet’s painting A Bar at the Folies-Bergere, click on the image of the painting above.