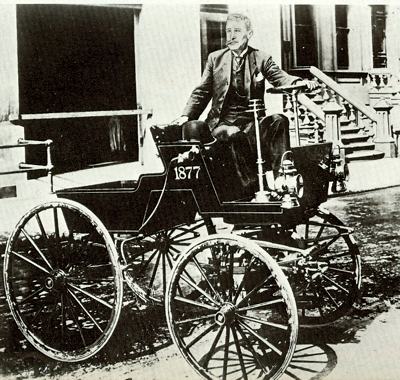 On November 5, 1895, Rochester attorney George Selden wins U.S. Patent No. 549,160 for an “improved road engine” powered by a “liquid-hydrocarbon engine of the compression type.” With that, as far as the government was concerned, George Selden had invented the car–though he had never built a single one.

Selden’s design was fairly vague, and was actually based on a two-cylinder internal-combustion engine that someone else had invented: Selden had simply copied the one he’d seen on display at the 1872 Philadelphia Centennial Exposition. In 1899, Selden sold his patent to a group of investors who called themselves the Electric Vehicle Company. In turn, they immediately sued the Winton Motor Carriage Company, the largest car manufacturer in the United States, for infringing on the Selden patent just by building gas-powered cars. Winton settled, and the court upheld Selden’s patent in 1903.

Soon, some automakers realized that the Selden patent didn’t have to be a threat to their business. On the contrary, it could be quite profitable and limit competition in a highly competitive industry. About 30 car companies, including Winton, got together with Selden and the EVC to form the Association of Licensed Automobile Manufacturers (ALAM). The ALAM sued anyone who built a gas-powered car without Selden’s permission–in other words, anyone who had not paid to join the Selden cartel. It also drummed up business for its own members by threatening to sue anyone who bought a car from an unlicensed company. (Its ads warned: “Don’t buy a lawsuit with your new automobile!”)

But Selden’s group, composed mostly of Eastern carmakers that built ritzy cars for rich buyers, made a mistake: It excluded the Midwestern manufacturers who built lower-priced cars for ordinary people. In particular, it excluded Henry Ford. [2] On October 22, 1903, the ALAM sued Ford for patent infringement, but the case took until 1909, seven months after the Model T [3]was introduced, to go to trial. Most Americans, delighted to have the opportunity to buy an affordable car, were on Ford’s side, but the judge was not: The court ruled that any gas-powered vehicle unlicensed by the ALAM violated the Selden patent and was illegal.

But on January 11, 1911, the appeals court ruled in Ford’s favor: the Selden patent, it said, only applied to replicas of the exact engine that Selden had seen in 1872.

For this and other November 5 events, go to History.com [4]

In “Founding Fathers of the Automotive Industry – George Baldwin Selden [1],” Selden is described as a life long tinkerer who had built internal combustion engines and wanted to build a gas powered vehicle. That article give Selden much more credit that the History.com article.

See also “Winton- The story of Alexander Winton, Father of the US Auto Industry [5]“ 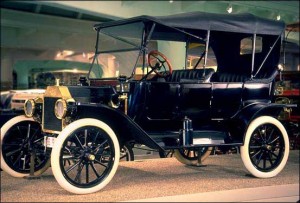 For a look at vintage automobile ads go to Vintage Ad Browser [6].

For a look at some lone gone marques, see ucapusa.com [7]. This collection represents only a small number of the marques no longer in production. The United States alone has had over 1400 marques.