Yankees and Rebels clash at the Battle of Westport 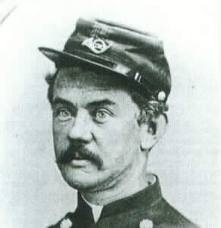 [1]On this day in 1864, Confederate General Sterling Price’s raid on Missouri nearly turns into disaster when his army is pinned between two Union forces at Westport, Missouri, near Kansas City. Although outnumbered, Price’s forces managed to slip safely away after the Battle of Westport, which was the biggest conflict west of the Mississippi River.

Price’s six-week raid on Missouri was intended to capture a state that had been firmly in Union hands during much of the war. Price hoped to divert attention from the East, where Confederate armies had not done well in the late summer of 1864. A blow against Northern territory could also hurt the Republicans in the fall elections, and it could raise much-needed supplies.

Price entered Missouri from Arkansas in mid-September. His force moved through the state with little opposition, but Price failed to capture either St. Louis or Jefferson City. In mid-October, he turned west up the Missouri River and captured several small Federal outposts. At Byram’s Ford on October 22, Price’s men pushed aside a small Union force attached to General Samuel Curtis’s army. The rest of Curtis’s men waited at Westport to the northwest. Price also faced a threat to his rear because Yankee cavalry under Alfred Pleasonton were moving in from the southeast. In short, Union troops were converging on Price from two directions.

On October 23, Price tried to fight his way out of his predicament by first attacking Curtis’s troops along Brush Creek, near Westport. The Confederates enjoyed some initial success as they drove the Federals across Brush Creek, but Price did not have sufficient reserves to continue the drive. Meanwhile, Pleasonton’s men were attacking on the other side of the battlefield, placing Price in a dangerous position. As Pleasonton’s men pushed the Confederates back, Curtis’s men also turned the tide on the northwestern side of the battlefield. Price’s troops broke, and a mad retreat to the southwest ensued. Price’s army might have been completely destroyed if the two Union forces could have coordinated pursuit. Instead, the exhausted Yankees halted, hesitant to continue the fight.

Price’s force was soundly defeated, though each side lost about 1,500 men. That was only about 10 percent of the Union troops, but it was 20 percent of the Rebel force. Price’s men retreated into Kansas before the remnants of the force dispersed back into Texas and Oklahoma. In the end, Price’s raid did little to disrupt the fall elections.