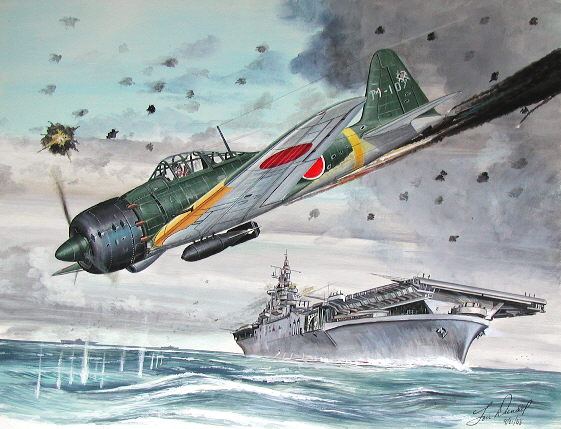 On this day in 1944, during the Battle of the Leyte Gulf, the Japanese deploy kamikaze (“divine wind”) suicide bombers against American warships for the first time. It will prove costly–to both sides.

This decision to employ suicide bombers against the American fleet at Leyte, an island of the Philippines, was based on the failure of conventional naval and aerial engagements to stop the American offensive. Declared Japanese naval Capt. Motoharu Okamura: “I firmly believe that the only way to swing the war in our favor is to resort to crash-dive attacks with our planes…. There will be more than enough volunteers for this chance to save our country.”

The first kamikaze force was in fact composed of 24 volunteer pilots from Japan’s 201st Navy Air Group. The targets were U.S. escort carriers; one, the St. Lo, was struck by a A6M Zero fighter and sunk in less than an hour, killing 100 Americans. More than 5,000 kamikaze pilots died in the gulf battle-taking down 34 ships.

For their kamikaze raids, the Japanese employed both conventional aircraft and specially designed planes, called Ohka (“cherry blossom”) by the Japanese, but Baka (“fool”) by the Americans, who saw them as acts of desperation. The Baka was a rocket-powered plane that was carried toward its target attached to the belly of a bomber.

All told, more than 1,321 Japanese aircraft crash-dived their planes into Allied warships during the war, desperate efforts to reverse the growing Allied advantage in the Pacific. While approximately 3,000 Americans and Brits died because of these attacks, the damage done did not prevent the Allied capture of the Philippines, Iwo Jima, and Okinawa.