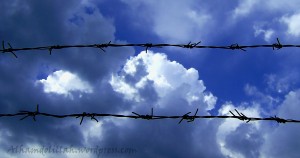 Joseph Glidden applies for a patent on his barbed wire design

On this day in 1873, a De Kalb, Illinois, farmer named Joseph Glidden submits an application to the U.S. Patent Office for his clever new design for a fencing wire with sharp barbs, an invention that will forever change the face of the American West.

Glidden’s was by no means the first barbed wire; he only came up with his design after seeing an exhibit of Henry Rose’s single-stranded barbed wire at the De Kalb county fair. But Glidden’s design significantly improved on Rose’s by using two strands of wire twisted together to hold the barbed spur wires firmly in place. Glidden’s wire also soon proved to be well suited to mass production techniques, and by 1880 more than 80 million pounds of inexpensive Glidden-style barbed wire was sold, making it the most popular wire in the nation. Prairie and plains farmers quickly discovered that Glidden’s wire was the cheapest, strongest, and most durable way to fence their property. As one fan wrote, “it takes no room, exhausts no soil, shades no vegetation, is proof against high winds, makes no snowdrifts, and is both durable and cheap.”

The effect of this simple invention on the life in the Great Plains was huge. Since the plains were largely treeless, a farmer who wanted to construct a fence had little choice but to buy expensive and bulky wooden rails shipped by train and wagon from distant forests. Without the alternative offered by cheap and portable barbed wire, few farmers would have attempted to homestead on the Great Plains, since they could not have afforded to protect their farms from grazing herds of cattle and sheep. Barbed wire also brought a speedy end to the era of the open-range cattle industry. Within the course of just a few years, many ranchers discovered that thousands of small homesteaders were fencing over the open range where their cattle had once freely roamed, and that the old technique of driving cattle over miles of unfenced land to railheads in Dodge City or Abilene was no longer possible.