LOVELAND, Colo. – The Bossier-Shreveport Mudbugs evened the Central Hockey League’s Presidents’ Cup Finals series with a 5-3 win over the Colorado Eagles in Game 2 of the best-of-seven set. The ‘Bugs got their five goals from five different players on just 19 shots in the contest. For the Eagles, Riley Nelson continued his strong play, playing a part in all three of his team’s scores.

The Mudbugs struck just 30 seconds into the contest — the fastest goal allowed in a playoff game in Eagles’ history — when Brett Smith blasted his team’s first shot past Kyle Jones from inside the left circle.

Exactly three minutes later, pressure from a fore-checking Nelson led to a turnover behind the Bossier-Shreveport net, and the Eagles’ captain found Kevin Ulanski in the low slot. Ulanski’s shot was stopped by John DeCaro, but Adam Chorneyko was in tow, waiting to put home the rebound.

During the second half of the first period, Colorado was tasked with killing 1:26 of a 5-on-3 advantage for the ‘Bugs, and they did it superbly, holding Bossier-Shreveport to just one shot on the advantage. That effort helped ensure the teams would enter the first intermission tied at 1.

The Mudbugs went up 2-1 at 10:38 when Steven Crampton sent a cross-ice pass to Simon Mangos who beat Jones low to the far side, sneaking a shot inside the left post. The Eagles tied it up at 2 at 13:58 when Nelson picked up his playoff-leading 10th goal with a backhand chop at the puck from between the hash marks.

But at 16:37, Justin Aikins put the ‘Bugs back on top, 3-2, when he took a lead pass from Nick Layton, cruised down the right wing and beat Jones with an almost identical shot as Mangos’. That is how the game would enter the second intermission. 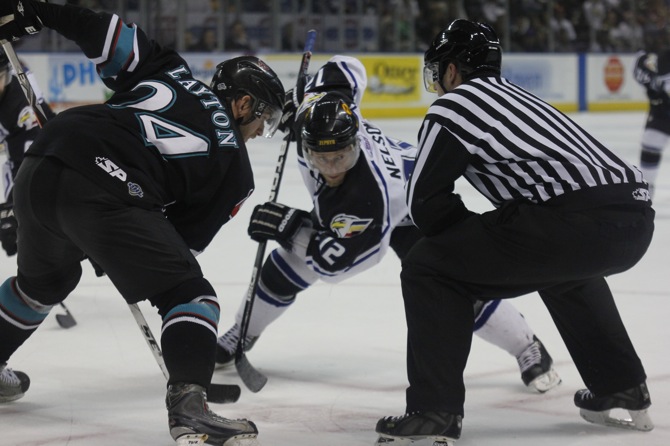 Jeff Kyrzakos doubled Bossier-Shreveport’s lead at 6:09 of the third period with a shot from high in the left circle. And Crampton made it 5-2 at the 12:20 mark by converting some tic-tac-toe passing inside the Eagles’ zone. On the pretty play, Smith sent a cross-ice pass to Andy Contois in the left circle, who then found Crampton crashing the net.

Colorado kept fighting, however, and in the middle of the action once again was Nelson. The regular season MVP created a goal similar to the Eagles’ first of the game with tenacious pursuit of the puck behind the Mudbugs’ net. After steeling it from a defender, he found Chorneyko alone in the low slot to make it 5-3.