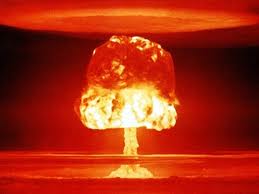 In the Republican presidential debate on November 12 focusing upon issues of foreign policy, former U.S. Senator Rick Santorum, speaking of Iran’s efforts to obtain nuclear capability, said, “We should be working with Israel right now to do what they did in Syria, what they did in Iraq, which is to take out that nuclear capability before the next explosion we hear in Iran is a nuclear one, and then the world changes.”

With all respect, Mr. Santorum, the world has changed. We are 66 years beyond the moment when nuclear weapons were first used—by the United States—to kill actual people, and 49 years beyond the Cuban Missile Crisis, when the planet came unacceptably close to thermonuclear annihilation.

A mutual nuclear paroxysm between Iran and Israel would be a repeat of the holocaust of World War Two, this time in minutes rather than years, incinerating not only the Jewish state but also millions of Iranian men, women and children. More pre-emption might delay that unthinkable possibility, but it will also only intensify the hate and fear that could make holocaust 2.0 inevitable further down the time-stream.

Unless the family of nations changes its approach, somewhere, sometime, there will be a terrible error, or accident, or a slide down the slippery slope into nuclear war. One recalls the gripping climactic scene in “Bridge Over the River Kwai” where British prisoners of war complete the great bridge, only to watch British commandos blow it up. Looking on, the camp medical officer cries out “Madness! Madness!”

In 1979, the father of the “Muslim bomb,” the Pakistani scientist A. Q. Khan, gave the German magazine Der Spiegel one of the saddest and most revealing interviews ever published. In it he questioned “the bloody, holier-than-thou attitudes of the Americans and the British. These bastards are God-appointed guardians of the world, to stockpile hundreds of thousands of nuclear warheads and have the God-given authority of carrying out explosions every month. But if we start a modest programme, we are the Satans, the devils . . .”

Whether or not Khan had a point, he was so lost in his enraged response to what he saw as colonial condescension that it never occurred to him to look objectively at the utility of nuclear weapons and the impossibility of victory in a nuclear war. Instead, his sense of having been patronized intensified his tragic desire to produce a weapon as a source of national pride. Madness!

In the Republican debate, Representative Bachmann and Santorum affirmed their support of foreign aid for Pakistan, saying it must remain an ally because it has nuclear weapons. So the policy debate ties itself in knots: Iran must be pre-emptively bombed to prevent its becoming nuclear, and nuclear Pakistan, whose intelligence service aids groups who are killing American soldiers just beyond their borders, must continue to receive billions of our aid dollars because it is nuclear.

It is long past the time when we, the “we” of any particular nation, need to set aside the illusion that because we are the good guys, we have the right to our nuclear weapons, and “they” (who also may be convinced they are the good guys), must be prevented from getting them.

This does not mean that the international community should give up unflagging efforts to prevent more nations, let alone non-state entities, from possessing nuclear materials and weapons. What we need to do now is include ourselves as example setters and renounce our exceptionality. Instead, the United States (joined by other nuclear nations) is allocating vast sums to renewing and diversifying its nuclear arsenal.

Realizing at last with such luminaries as former Secretary of State Schultz that these weapons have zero strategic value to any nation, all nuclear states should join negotiations toward zero in numbers.

The monster in our midst, before it is a deployed weapon capable of reducing a modern city to ash in seconds, is a scientific principle which cannot be unthought. It is with this little planet forever now, an extraordinary achievement which challenges our species to come up with an understanding of our interdependence that is equal to its destructiveness. If it does that, perhaps it will have served a genuinely useful purpose.

It is not an Iranian monster or a North Korean monster or an Al Qaeda monster that can be conquered by clever and ruthless pre-emption. It is a monster created by human minds, and only human minds will conquer it—together. It is our monster.