Sunday, Jan. 11
A naked male was reported in the 100 block of S. Third St. at 4:11 a.m. The individual was first spotted when he tried to enter the home of the Berthoud Chief of Police. After calling for backup, the chief and officer Carline apprehended the man as he was pounding on the door of a house on Welch Ave. Officer Carline recognized the man and described him as cooperative, very intoxicated and naked. The man complained of a broken ankle so the officer called for an ambulance and retrieved some clothing from the man’s residence on Third St. The ambulance crew determined tthe man should be taken to McKee Medical Center. While there are conflicting accounts of why the man ended up outside naked at 4 a.m., he faces arrest on several charges including violation of a restraining order that contains a “No alcohol clause.”

Tuesday, Jan. 13
A vehicle parked in Berthoud Library parking lot had the driver’s side quarter panel damaged by a vehicle which left the scene without reporting the accident or exchanging insurance information. Police are looking for the hit and run driver.

Thursday, Jan. 15
Following a verbal altercation in class, a Berthoud High School student assaulted another other student in the parking lot. The “assaulted’ student was being treated by paramedics when the police officer arrived and was transported to the Medical Center of the Rockies for evaluation. He was released with minor facial injuries. Police were able to interview both boys and some witnesses. The fight took place in what witnesses and combatants called the “Smoker’s Corner” where both boys had gone to smoke. While there was some conflicting testimony from the boys, police were able to determine from witness accounts who they believed to be at fault and issued a summons for assault. There appears to be a long history of conflict and bullying between the two.

Saturday, Jan. 17
A car backed into another vehicle in the parking lot at First St. and Bunyan Ave. and fled the scene. Listed as another hit and run incident.

Sunday, Jan. 18
Just before 2 p.m., police stopped a car traveling at 53 miles per hour in a 30 mile per hour zone in the 500 block of First St. While approaching the vehicle the officer noted that the license plates had expired. While checking the driver’s license and proof of insurance, the officer noted the odor of marijuana. A subsequent search of the vehicle found evidence of marijuana and paraphernalia, including 20 glass pipes the driver said he had just made that day. The driver received a citation for speeding and possession and the police took the marijuana and paraphernalia into custody.

Tuesday, Jan. 20
The Berthoud Recreation Department reported an attempted break in at the concession stand at the baseball field, 856 Spartan Ave. Suspects had removed the screws from the frame of the concession stand window and attempted to pry off the plywood. Attempts to gain entry were unsuccessful, but two outside light fixtures were broken off the wall and two soft drink vending machines were vandalized.

Wednesday, Jan 21
A burglary and arson was reported at the Berthoud High School. Mr. Robert Kennard called in the report and told police that sometime within the past few weeks, someone had broken into the storage shed near the baseball field. Missing from the shed were five baseball bats and two buckets of baseballs. The officer also found burned baseball uniforms and burned paper inside.

Thursday, Jan. 22
A Ford Ranger pickup traveling north on Sixth St. was hit in the right side by a Jeep traveling westbound on Turner Ave. at approximately 1 p.m. The slow speed collision at this uncontrolled intersection caused the pickup to roll over on its top. No injuries were reported. The Berthoud Fire Protection District also responded due to fuel leakage.

Saturday, Jan. 24
A vehicle trespass was reported in the parking lot at 120 Bunyan Ave. Sometime between 3 and 7 a.m. someone used a rock to shatter both front door windows of a Jeep Cherokee and then stole the radio from the dashboard.

A driver turning into the post office parking lot apparently did not notice there was a vehicle approaching on Third St. The southbound car was struck in the driver’s door and caused a great deal of distress for the female driver. Her male passenger told the investigating officer he might have hit his head. An infant in the car seat appeared to be uninjured. Though apparently not a fault in the accident, the young woman did not have a valid driver’s license nor proof of insurance for the vehicle. 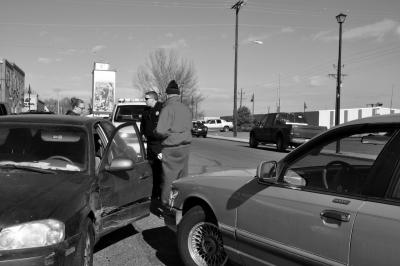 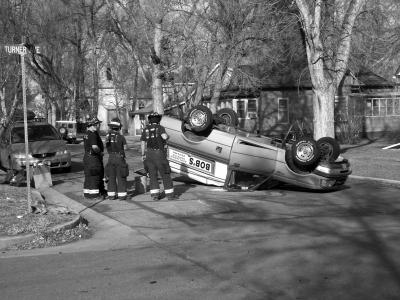 <p>It was a tough day in Town for cars on Saturday, Jan. 24. No one was injured in this fender-bender outside of the Berthoud post office.</p>

<p>A Ford Ranger sits on its top at the intersection of Turner Avenue and Sixth Street after a collision on Thursday, Jan. 22 with a Jeep. Thankfully, no injuries were reported.</p>

<p>This Jeep Cherokee was vandalized in the parking lot at 120 Bunyan Ave.</p>