Larimer County Sheriff’s Office investigators have determined the report of a sexual assault by a police impersonator is false and did not happen. 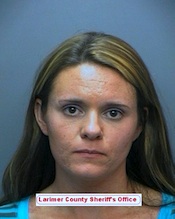 As a result, Heather Speicher, DOB: 08/19/84, of Fort Collins has been arrested for Attempting to Influence a Public Official (F4). Plans to seek restitution for the misdirection of valuable, limited law enforcement resources are being discussed with the District Attorney’s office.

Ms. Speicher is being held at the Larimer County Jail on a $2500 bond.

Ms. Speicher reported that on the evening of January 5, 2012 she was stopped by a man portraying himself as a police officer and subsequently sexually assaulted. An extensive investigation ensued. Six investigators and two lab personnel were assigned to the case and reviewed approximately 40 tips, that were generated by the public, for four consecutive days after the initial report. Ms. Speicher also assisted investigators in developing a composite sketch of the fictitious suspect.

Larimer County Sheriff Justin Smith said it is important to fully investigate any allegation of sexual assault as well as police impersonation; however, false reports of this nature redirect very limited resources that are needed for other important investigations.

While this report proved to be false, incidents of this nature do occur. Motorists are still reminded to be cautious when stopped by an unmarked or uneasily identified vehicle.  They are encouraged to turn their flashers on and drive safely to a well-lit populated area and/or call 911 to verify the identity and location of officers. Motorists are further encouraged to stay in their vehicle until an additional officer in a marked vehicle arrives. Law enforcement vehicles are typically later models with significant emergency light systems.

No additional information will be released.