Mike Ehredt is running across the United States, planting a flag every mile. The flags each have a ribbon with the name of a serviceman/woman killed in the Iraq war. 4,375 flags with 4,375 yellow ribbons along a route that measures 4,551 miles from Astoria, Washington to Rockland, Maine. Today he came to Berthoud.

Ehredt is a U.S. Army veteran and a retired postal clerk from the town of Driggs, Idaho, population 1,100.

Briggs is no stranger to endurance sports. According to the Project America Run website [1] he has been cyclist, riding 474 miles in 24 hours to raise money for Muscular Dystrophy. He competed in cycle racing world wide, took up downriver canoe racing, winning an national championship in Canoe Orienteering. Running has always been part of his fitness program, winning the Army Cross Country Championship as a young soldier in Germany to completing a 250 mile Trans-Himalayan run in Nepal.

Ehredt began the journey on May 1. He covers approximately 30+ miles per day. The entire route and mileage are available on the website.

Ehredt completed his Boulder to Berthoud run for Thursday, arriving at the Highway 287/Highway 56 intersection around 3:30 p.m. He has a three wheel stroller to carry his supplies. It includes an odometer for mileage, a GPS locator that plots his position every two minutes (displayed on the website) and solar panels to charge his phone and GPS. It also has seven sets of shoe laces denoting the seven pair of running shoes he has already worn out. 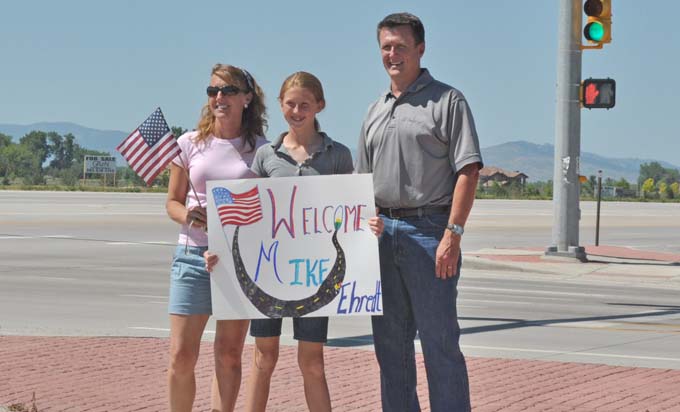 Ehredt stays with host families along the way and he is in Berthoud to stay with Scott and Suzanne Cavey. Scott Cavey is a friend of Ehredt’s project manager Wally Thrall and is likely responsible for Thrall’s living in Driggs, Idaho, having recommended the area for a fishing trip. Thrall planned the route so it would pass through Berthoud.

Kyle Cavy joined Ehredt near the Boulder County line and ran the last three miles with him to where his parents and sister Kristina were waiting with the welcome sign.

Ehredt will start early Friday morning for the next leg to Fort Collins and then east to the Colorado plains.