At a time of growing suspicion about the way the federal government conducts the people’s business, the recent whistleblower allegations related to big-time investors’ special access to government information certainly were not heartening. POGO Senior Fellow Adam Zagorin wonders where the oversight is. Read about it on POGO’s blog [3].

The F-35 Joint Strike Fighter (JSF) program faces a bevy of serious issues that have the potential to further drive up costs and to significantly add to delays to the program, according to the findings of a high-level Pentagon review completed in November 2011. POGO Director of Investigations Nick Schwellenbach was the first to expose a leaked Pentagon report that highlights the problems. Read about it on POGO’s blog [5].

The Lasting Shadow of Bernie Madoff

Even though his case if officially over and he is behind bars, Bernie Madoff’s impact on both his victims and the system that missed his fraud is far from over. Diana R. Henriques exchanged numerous emails with Madoff, and she uses them to delve into his impact. Read the story at The New York Times [6].

Is Leon Panetta the Right Man to be Secretary of Defense?

Catastrophe. Doomsday. Crippling. Secretary of Defense Leon Panetta has been using extreme language when talking about the upcoming cuts to the Pentagon budget and the results of automatic sequestration cuts. Winslow Wheeler lays out why this rhetoric is, at best, puzzling. Read the story on Battleland [7].

POGO to Party in Our New Office on January 20

POGO will be moving into our new space next week (we’re still in Washington, DC at 1100 G Street—just heading down four floors). Because we’re so busy with the move, we’re going to be pushing our usual holiday party to January 20. The open-invitation party will be hosted in our new office, which we’re very excited about. Stay tuned!

From the World of POGO 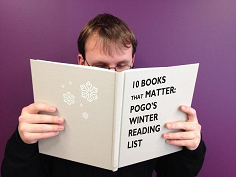 [9]Whether you’re looking for a book to curl up with in front of the fire, take with you to a beach in some tropical getaway, or give as a holiday present to your favorite wonk, POGO has you covered with our 10 Books that Matter: POGO’s Winter Reading List [10].   Post-War Challenges in Iraq [11]  While much of the media attention last week was focused on the end of the war in Iraq, POGO was looking forward at the monumental challenges awaiting the State Department. POGO Executive Director Danielle Brian said there’s reason to be concerned whether the State Department is up to the job. Read her statement on POGO.org. [12]