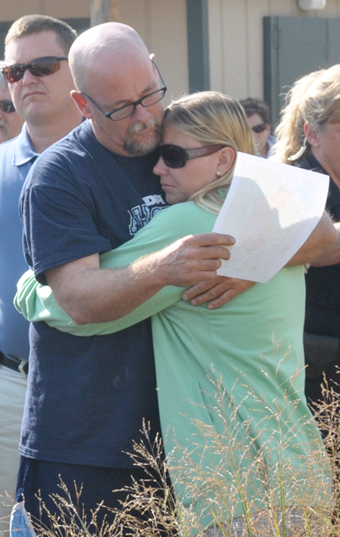 [1]
Lexi and P.J. DiPention after finding out their home was safe

Sometimes life throws us curveballs and we don’t even know we are at bat. Sunday started out like any other Sunday morning for our family. The kids and I went to the BMX track to prepare for the day’s racing and my wife set off for a day of work at The Derby Grille.

Around 11 a.m., while at the BMX track, I noticed smoke in the horizon. It did not appear to me to be a very big fire, but the location caught my attention. It appeared to be near our home on Pinewood Reservoir. I made a mental note to call Lexi and see if she had heard anything and went about setting the Berthoud BMX Track up for the day’s races.

A short time later Lexi called me from work; there was panic in her voice. “The fire department left us a message to evacuate the house because of a fire,’’ she proclaimed. My response was the typical who, what, why, where, when and after sorting out the information I realized the seriousness of the situation and left the Berthoud track to get up to the house as quickly as possible.

The nearer I got to the fire the more anxious I became. All kind of thoughts were running through my head. Most of all, what I was going to grab when I arrived at the house. My dog and cat were at the top of the list.

However, this was all wasted energy. Park rangers at the base of the hill informed me that I would not be able to go to the house and I could not get my pets. This left me ill as I realized I was helpless.

For the next two hours, I sat at the evacuation staging area at the Bison Center with my neighbors as we watched the air tankers trying to beat the fire down. What we saw was that the fire would not be stopped and it grew before our eyes to become a big, clouded monster crawling towards our house. My concern for the house and our pets was overwhelming as I tried to calm my wife and kids through broken cell phone conversations.

I signed in with the Red Cross and we soon received our first bit of good luck of the day. I heard my name being called and when I turned around I saw a familiar sight, my dog Spike in a full gallop headed for our van. My neighbor, Tracy, had enough forethought to check our house before she left and she took Spike with her. I called the kids and Lexi and they screamed with excitement at the news.

For the next six hours, we joined our neighbors watching the fire eat up our hills and the air support trying to beat it back down. Helicopter after helicopter pulled water from Flat Iron Reservoir while slurry bombers dropped load after load until darkness came upon the area.

The next twelve hours were unbearable for my wife and me. The thoughts of our home being lost were overshadowed by worry about all of our belongings being consumed in the fire. We had to look strong for each other and the children, but secretly, both of us were planning on losing everything.

We spent the night at a friend’s house about two miles from the fire and awoke to a cloud of smoke that looked like a California fog. Lexi got on the computer at the crack of dawn and tried to figure where the fire had gone as we slept. We eventually ended up at the Bison Center with our neighbors for the 10 a.m. press conference. This is when we learned that the fire had raced through the canyon during the night. The fire crews had protected the structures and our home was safe. Although, the fire crept within a few football field lengths of our home, we are convinced it was saved by the efforts of the firefighters.

I remember looking at my watch during the press conference and thinking its been 24 hours since the fire started, and I couldn’t help but wonder what the next 24 had in store for us. Its times like these that we realize life can change in a blink of an eye, or in this case a spark of fire.