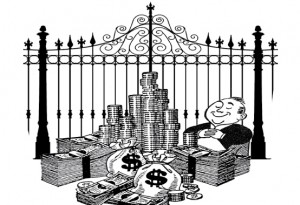 Our financial elites are the new secessionists.

It was 1993, during congressional debate over the North American Free Trade Agreement. I was having lunch with a staffer for one of the rare Republican congressmen who opposed the policy of so-called free trade. To this day, I remember something my colleague said: “The rich elites of this country have far more in common with their counterparts in London, Paris, and Tokyo than with their fellow American citizens.”

That was only the beginning of the period when the realities of outsourced manufacturing, financialization of the economy, and growing income disparity started to seep into the public consciousness, so at the time it seemed like a striking and novel statement.

At the end of the Cold War many writers predicted the decline of the traditional nation-state. Some looked at the demise of the Soviet Union and foresaw the territorial state breaking up into statelets of different ethnic, religious, or economic compositions. This happened in the Balkans, the former Czechoslovakia, and Sudan. Others predicted a weakening of the state due to the rise of Fourth Generation warfare and the inability of national armies to adapt to it. The quagmires of Iraq and Afghanistan lend credence to that theory. There have been numerous books about globalization and how it would eliminate borders. But I am unaware of a well-developed theory from that time about how the super-rich and the corporations they run would secede from the nation state.

I do not mean secession by physical withdrawal from the territory of the state, although that happens from time to time—for example, Erik Prince, who was born into a fortune, is related to the even bigger Amway fortune, and made yet another fortune as CEO of the mercenary-for-hire firm Blackwater, moved his company (renamed Xe) to the United Arab Emirates in 2011. What I mean by secession is a withdrawal into enclaves, an internal immigration, whereby the rich disconnect themselves from the civic life of the nation and from any concern about its well being except as a place to extract loot. … Read More [1]