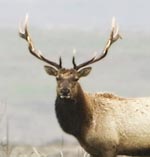 [1](Nov. 9, 2010) — The Humane Society of the United States and The Humane Society Wildlife Land Trust are offering a reward of up to $2,500 for information leading to the arrest and conviction of the person or persons responsible for poaching a bull elk in downtown Estes Park, Colo. This offer adds to an existing $5,000 reward being offered by the Colorado Division of Wildlife’s Operation Game Thief.

According to the Colorado Division of Wildlife, on or around Oct. 15, a mature bull elk was struck by an arrow in his spine, near his hindquarters. The elk later had to be euthanized by police when it was determined that the animal was unable to walk or eat as a result of his injuries.

“The callous actions of the person or persons responsible caused this animal to suffer immensely. This egregious case evidences how crucial it is to bring poachers to justice for their crimes, and we implore anyone with information to come forward,” said Holly Tarry, Colorado state director for The HSUS. “The Humane Society of the United States applauds the Colorado Division of Wildlife for their efforts to find those responsible for this serious crime.”

Wildlife officials estimate that for every wild animal killed legally — tens of millions of animals per year — another is killed illegally.

The HSUS and HSWLT work with state and federal wildlife agencies to offer rewards of $2,500 for information leading to arrest and conviction of suspected poachers.

Anyone who has information about this incident should contact the Operation Game Thief at 1-877-265-6648. Callers may remain anonymous.

The HSUS and HSWLT work to stop poaching across the country. Visit humanesociety.org/poaching for more information.

The Humane Society of the United States is the nation’s largest animal protection organization — backed by 11 million Americans, or one of every 28. For more than a half-century, The HSUS has been fighting for the protection of all animals through advocacy, education and hands-on programs. Celebrating animals and confronting cruelty — On the Web at humanesociety.org.

Follow The HSUS on Twitter. See our work for animals on your iPhone by searching “HumaneTV” in the App Store.

Since 1993 the Humane Society Wildlife Land Trust, alone or in partnership with other conservation groups, has participated in the protection of more than 1.8 million acres of wildlife habitat in 38 states, including 518 acres in Colorado, and eight foreign countries. On all properties owned by the Trust or protected by the Trust’s conservation easement, both here and abroad, we prohibit recreational and commercial hunting and trapping and restrict logging and development. The Trust’s commitment to these principles will never change as we continue to assist caring landowners to make their property permanent, safe homes for wildlife. Join our online community at wildlifelandtrust.org.