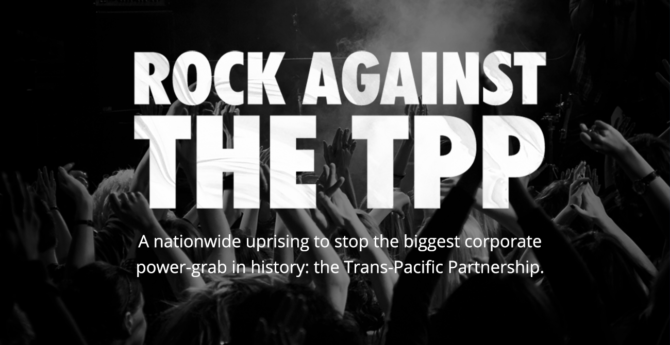 DENVER, CO––This Saturday, July 23, legendary guitarist Tom Morello (Prophets of Rage, Rage Against the Machine, Audioslave), popular punk band Anti-Flag, Golden Globe nominated actress Evangeline Lilly (Lost, The Hobbit, Ant-Man), Denver-based hip-hop outfit Flobots, and buzzworthy bi-lingual rockers Downtown Boys will appear at a free concert in Denver at Summit Music Hall to mobilize opposition to the Trans-Pacific Partnership (TPP) agreement. The event will kick off the Rock Against the TPP roadshow, a nationwide series of activism-fueled music events designed to raise awareness about the dangers of the toxic deal, which was negotiated in secret with hundreds of corporate advisors. Organized by Morello’s new label, Firebrand Records and digital rights group Fight for the Future, other stops on the tour feature well-known performers like Talib Kweli and Jolie Holland. The TPP has little to do with trade, but would provide multinational corporations with new rights and powers that threaten good paying jobs, Internet freedom, the environment, access to medicine, and food safety.

The events in Denver begin at 5:00pm with a rally and press conference outside Summit Music Hall, MC’d by Jonny 5 & Brer Rabbit of the Flobots. Tom Morello, Evangeline Lilly, and organizers of the event  will provide statements to the press. The concert then begins at 6:00pm.

See a full lineup and Rock Against the TPP tour dates here: RockAgainstTheTPP.org [1]

Following the kick-off event in Denver this Saturday, the tour’s organizers have revealed three additional stops in San Diego, Seattle, and Portland, OR, with more dates to be announced.

“Working people everywhere have had enough,” said Tom Morello, “The TPP is nothing short of a corporate takeover of our democracy. That’s why people are rising up to stop it. Corporate lobbyists want to sneak the TPP through Congress quietly; that means it’s time for us to get loud.”

“This fight against the TPP is not about right and left, it’s about right and wrong,” said Evangeline Lilly, “Whatever you’re passionate about, whether it’s human rights, internet freedom, climate change, or food safety, the TPP is a bad deal for humanity, and a threat to the future of democracy. The more people learn about the TPP, the less they like it. It’s our responsibility to sound the alarm, before it’s too late.”

The Rock Against the TPP [2] Tour is being organized by Fight for the Future [3], the viral Internet freedom group best known for organizing the largest online protests in history against online censorship and in favor of free speech and privacy. Firebrand Records [4], the new social justice infused record label co-founded by Tom Morello and Ryan Harvey, is acting as the tour’s artistic partner. The roadshow is sponsored and co-organized by a diverse coalition of groups fighting against the corporate power grab that is the TPP, including Backbone Campaign, Citizens Trade Campaign, Communications Workers of America, CREDO, Demand Progress, Friends of the Earth, the International Labor Rights Forum, Private Internet Access, Public Citizen, the Sierra Club, SumOfUs, and the Teamsters. More than 30 organizations have endorsed the effort, including the Electronic Frontier Foundation, National Nurses United, and the International Brotherhood of Carpenters.

Additional performers for the Denver kick-off include Firebrand Records artists Ryan Harvey [5], Lia Rose [6], and Son of Nun [7], Puerto Rican vocalist Taina Asili [8], and riot-folk singer / Fight for the Future campaign director Evan Greer [9], the tour’s lead organizer. Speakers from a broad coalition of local and national organizations opposing the TPP will address the crowd, explaining the many dangers posed by the agreement.

“The TPP is not a trade deal, it’s a corporate coup––an attack on the future of democracy and free speech,” said Evan Greer, “people from across the political spectrum overwhelmingly oppose it, and we’re going to fight not only to stop the TPP, but to make sure that decisions that affect all of us are never made behind closed doors in the future.”

Rock Against the TPP Tour dates

About Tom Morello: Incendiary rock guitarist and acoustic troubadour Tom Morello, known for his innovative guitar solos and thunderous chords, is a groundbreaking artist whether in his solo career or as an original member of the rock bands Rage Against the Machine and Audioslave, two acts responsible for multiple Grammy Awards and a combined 30 million albums sold worldwide. He’s released four solo albums as The Nightwatchman and formed the band Street Sweeper Social Club with Boots Riley of The Coup in 2009. Morello has also been recognized by Rolling Stone magazine as one of the “100 Greatest Guitar Players of All-Time (#26).” Morello has produced or collaborated with artists of diverse genres including WuTang Clan, Johnny Cash, Tool, John Fogerty, Anti-Flag, Public Enemy, Joe Strummer, Crystal Method, Calle 13, Dave Mathews Band, Johnny Cash, Linkin Park, Travis Barker and Pete Seeger. In addition, he joined Bruce Springsteen and the E-Street Band for their 2014 world tour in support of Springsteen’s studio album High Hopes (Columbia Records) on which Morello is featured on eight tracks.  Most recently, Morello has joined forces with fellow Rage Against The Machine bandmates Tim Commerford and Brad Wilk, as well as Cypress Hill’s B-Real and Public Enemy’s Chuck D and DJ Lord to form the band Prophets of Rage. The group came together as a politically charged response to 2016’s tumultuous election year and after three sold-out club shows announced the launch of a 35-city trek across North America this summer.

About Evangeline Lilly: Evangeline Lilly is an actress best known for her role as Kate Austen in LOST and films including The Hurt Locker, Real Steel, The Hobbit and Ant-Man. Evangeline is also a cross-genre writer, who writes for multiple demographics, and is a published author of her children’s book series, The Squickerwonkers. With a background in International Relations and Political Science, Evangeline has long held a passion for social justice and is a strong advocate for Fight for the Future – and for democracy.

About Anti-Flag (performing an acoustic set): After more than 20 years writing smash hits about smashing the state, ANTI-FLAG has cemented themselves as the premiere political punk band around with an unparalleled ability to write high-energy, riffy, fist-pumping, sing-along anthems that never lose sight of the band’s anti-war, anti-imperialism, pro human rights ethos.  Equal parts circle pit and picket line, their blistering and earnest live show brings a sense of community to the stage that unites people of all backgrounds and struggles.

About the Flobots: Denver, Colorado’s revolutionary hip-hop act Flobots bring it on real with their signature anthems dedicated to creating a better world. Since forming in 2005, Flobots have released three full length albums, toured throughout the US and Europe, and appeared on late night programs including The Tonight Show and Late Night. Flobots are internationally known for their 2008 platinum single “Handlebars” and widely recognized for using their music as an inspiration for social change.

About Downtown Boys: Downtown Boys are a bilingual political sax punk party from Providence, Rhode Island in the northeast United States. Rolling Stone called them “America’s Most Exciting Punk Band” and NME has declared them a Band to Watch in 2016. They write songs about smashing the prison-industrial complex, racism, queerphobia, capitalism, fascism, boredom, and all things people tell us that try to close our minds, eyes, and hearts. The band is known for their live performances, which are equal parts punk show, political rally, and religious revival. Frontwoman Victoria Ruiz delivers moving speeches between songs, working the crowd into an angry but hopeful frenzy. The songs themselves are delivered with an earnestness, fun, and intensity that’s stunned audiences on their tours throughout North America.

About Fight for the Future: Fight for the Future is a non-profit with more than 1 million members dedicated to defending and expanding the Internet’s transformative power for good. They’re best known for their vibrant, viral campaigns, and for organizing the largest online protests in history against SOPA, for net neutrality, and against mass surveillance. Last year, the group drove tens of thousands of phone calls and emails to Congress opposing the TPP through its StopFastTrack.com [11] coalition page. They also made headlines for flying a 30 foot blimp [12] opposing the TPP over Senator Ron Wyden’s town hall meetings in Oregon. Fight for the Future conceived of the Rock Against the TPP effort, and are leading the organizing of the tour, with support from a wide range of public interest groups, labor unions, and grassroots volunteers.

About Firebrand Records: Firebrand is a bold new project from Ryan Harvey (Riot-Folk) and Tom Morello (Rage Against The Machine, Audioslave, Prophets of Rage) dedicated to the global release and distribution of radical, socially conscious music. In recent years, people around the world have surprised each other with their courage, strength, and willingness to stand against injustice, militarism, and corruption. And where there has been protest, there has been music. Born from these times, Firebrand gives a platform for such voices. We know that music alone does not change the world, but we recognize that it is an integral part of the movements that do.