Question Time: What Did Mitt Romney Learn During His Travels Abroad? [2]

By Joe Conason in the National Memo 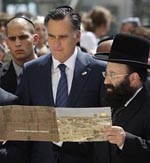 [2]Now that Mitt Romney has returned home from his entertaining sojourn overseas, perhaps someone will ask him a few pertinent (and impertinent) questions about the countries he visited. While visiting England, Israel, and Poland, the Republican candidate delivered remarks on their economic and health systems that could – if subjected to factual analysis – serve to educate American voters and conceivably even the ill-informed Romney himself.

Question: You and Mrs. Romney attended the colorful opening ceremonies of the Summer Olympics in London. During those festivities you must have noticed that noisy, enthusiastic tribute to the National Health Service – which featured dancing doctors and nurses who serve in Britain’s government-operated, publicly-financed, absolutely mandatory system of universal care. Does the continuing existence of this entity mean that the United Kingdom is “socialist”?

Followup: OK, why do you suppose the British people are so enamored of this obviously oppressive system that they celebrated its existence before a worldwide audience estimated at a billion viewers?

Question: In Poland, you delivered a speech on that country’s valiant struggle for freedom against the central economic controls that had stifled growth under Communism. Did you realize that the Polish Ministry of Health controls all health care services, with a National Health Fund that serves as the system’s single payer — with mandatory universal coverage funded by contributions collected from every employed citizen? … Read More [2]

Cartoon of the Day by Jeff Danziger