Paul believes in liberty… for businessmen. 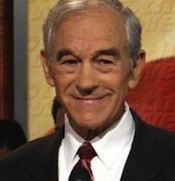 [3]Rep. Ron Paul, an icon to the libertarian Right and to some on the anti-war Left, gave a farewell address to Congress that expressed his neo-Confederate interpretation of the Constitution and his anti-historical view of the supposedly good old days of laissez-faire capitalism.

In a near-hour-long rambling speech [4]on Nov. 14, Paul also revealed himself to be an opponent of “pure democracy” because government by the people and for the people tends to infringe on the “liberty” of businessmen who, in Paul’s ideal world, should be allowed to do pretty much whatever they want to the less privileged.

In Paul’s version of history, the United States lost its way at the advent of the Progressive Era about a century ago. “The majority of Americans and many government officials agreed that sacrificing some liberty was necessary to carry out what some claimed to be ‘progressive’ ideas,” said the 77-year-old Texas Republican. “Pure democracy became acceptable.”

Before then, everything was working just fine, in Paul’s view. But the reality was anything but wonderful for the vast majority of Americans. A century ago, women were denied the vote by law and many non-white males were denied the vote in practice. Uppity blacks were frequently lynched.

The surviving Native Americans were confined to oppressive reservations at the end of a long process of genocide. Conditions weren’t much better for the white working class. Many factory workers toiled 12-hour days and six-day weeks in very dangerous conditions, and union organizers were targeted for reprisals and sometimes death.

For small businessmen, life was treacherous, too … READ MORE [2]