LOVELAND, Colo. – The Colorado Eagles fell to the Rapid City Rush, 4-2, in the teams’ second consecutive meeting. A pair of Rush players scored a pair of goals each in the win, helping the defending champs maintain their second place spot in the Turner Conference.

Both teams tossed 10 shots on net in the opening period, but Colorado failed to take advantage of back-to-back penalties midway though the frame and Rapid City added a pair of scores late to take a 2-0 lead into the first intermission.

While Colorado couldn’t get the puck past former-Eagle Tim Boron early, the Rush took advantage of their chances when Brendon Hodge found Riley Weselowski alone low in the left circle at 14:26 to start the scoring. And just over a minute and a half later, Rapid City made it 2-0 when Vladimir Hartinger sent a lead pass to Les Reaney, who made a power move toward the Eagles’ net before Derek LeBlanc swooped in and flipped home the rebound.

Rapid City dominated the second period, out-shooting the Eagles 19-3. Of those three shots, Colorado got one in at 9:18 to cut the defending champ’s lead in half when Daymen Rycroft sent a backhand pass from below the goal line to Dylan Stanley cruising through the low slot for a backhander past Boron.

But the Rush got that one back 12 minutes into the middle frame when Weselowski picked up his second goal of the game (he had just one coming into the contest) with a shot from the right point past a screened Kyle Jones. And just over five minutes later — with one second left on a two-man advantage — LeBlanc got his second goal of the game to make it 4-1 with a backhander from the doorstep. 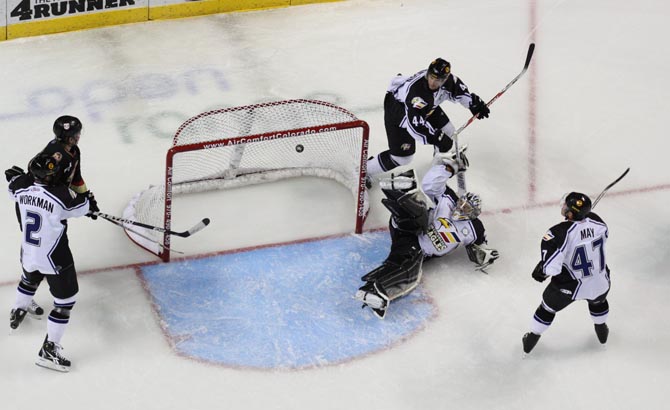 Content with a three-goal cushion, Rapid City spent the final frame clogging up the neutral zone and making it hard for Colorado to get anything going in the offensive zone. The Eagles, though, were able to score midway through when Rycroft netted his team-leading 17th goal from atop the right circle. The sharpshooter had come onto the ice as an extra attacker as Colorado was working a power play with an additional delayed penalty call.

On the ensuing power play, Boron robbed Adam Hogg by coming all the way out into the low slot to challenge him at the hash marks, stifling any momentum the Eagles were building. Colorado couldn’t get any closer despite pulling Jones for the final two minutes of the game.

The Eagles now embark on a three-games-in-three-nights road trip through Missouri and Texas. 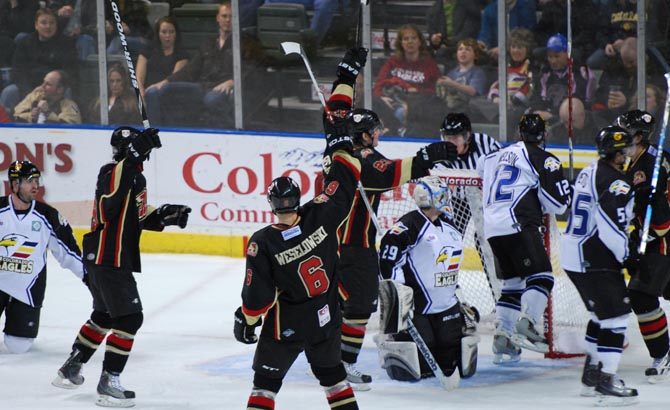