LOVELAND, Colo. – The Rapid City Rush forced a deciding Game 7 in the Turner Conference Finals with a 3-2 win over the Colorado Eagles. Colorado built a 2-0 lead on goals from Scott May before the defending league champs scored three unanswered goals. Each team tallied a shorthanded goal, but it was Colorado’s 0-for-9 power play that had the biggest impact on the game’s outcome. 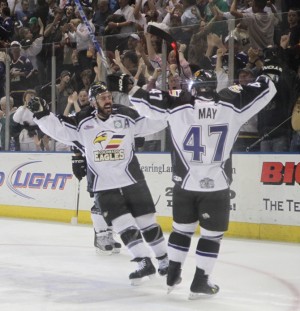 The Eagles got the only goal of the first period 6:09 in. May had been kicked out of the faceoff draw in the right circle of the offensive zone, being replaced by Adam Chorneyko. Chorneyko won the draw back to Kyle Peto at the right point and the defenseman’s shot was deflected 5-hole on Tim Boron by May who had drifted toward the front of the net.

Colorado had a chance to increase their lead when they were awarded a full 5-on-3 power play at 13:24 of the first period, but they couldn’t beat Boron despite a couple of quality chances.

At 8:59 of the second stanza, May made it 2-0 for the home team with the Eagles’ third shorthanded goal of the series. A moment after Rapid City received a lucky bounce off the wall to keep the puck in the offensive zone on their power play, the puck took a lucky bounce Colorado’s way, sending May on a breakaway that ended with him beating Boron from the left circle.

Rapid City finally got on the board at 16:21 when Gio Flamminio took advantage of their reliable power play (it’s converted in 17 straight games), snapping the puck past Andrew Penner from atop the left circle. The Eagles had another chance to increase their lead late in the second frame when Scott Wray drew blood with a high stick, putting Colorado on the power play for four minutes.

The Rush were penalized at the end of the second period, giving the Eagles 1:11 of another two-man advantage to start the third. But instead of building on their lead with the great opportunity, they gave up the tying marker when Les Reaney scored his playoff-leading ninth goal with a backhander from the right circle. 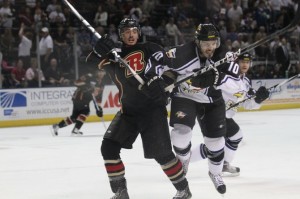 [2]
Steve Haddon tries to push through. Photo by Samanth Baker

Konrad Reeder had a chance to put Rapid City up five minutes in when he was awarded a penalty shot, but Penner snuffed his attempt to go 5-hole. Then, at 11:25, Derek LeBlanc got the game-winner when his slap-shot from atop the right circle rode up Aaron Schneekloth’s stick, changing the trajectory enough to elude the Eagles’ netminder.

With 3:59 left in the game, Colorado was awarded its ninth power play of the evening, but again failed to convert. In fact, they didn’t get off a shot, bringing their total for the game to 11 shots on their nine power plays.

Game 7 will be played in Rapid City, S.D. on Wednesday, starting at 6:35 p.m. (MST). The winner will take on the Berry Conference champion Bossier-Shreveport Mudbugs in the Ray Miron Presidents’ Cup Finals.