[2]According to an employee, agents of the Colorado Department of Revenue entered the Loveland Schmidt’s Olde Time Bakery this morning and locked the doors and then asked the customers to leave. Employees were give time to put food back into freezers and coolers and then they too had to leave.

Apparently, the deal struck last year to allow the popular restaurant to reopen had fallen through. The documents posted on the front door showed the bakery still owing July 2009 taxes plus several months of the 2010 taxes. The Withholding Taxes were more up to date with the company owing for October and December of 2010 and January of 2011. The combined total owed to the state is $24,401.11.

Accompanying the notices of delinquency was a Notice of Public Sale stating that:

“at TBD on TBD the TBD day of TBD at TBD to the highest and best bidder, all or so much of the following described property as is necessary to satisfy the said claim of said Executive Director of Revenue, to wit:

All of the personal property, furniture, fixtures, equipment and inventory owned by or used in the conduct of the business at 808 SW 14th Street, Loveland CO 80537-6331.” 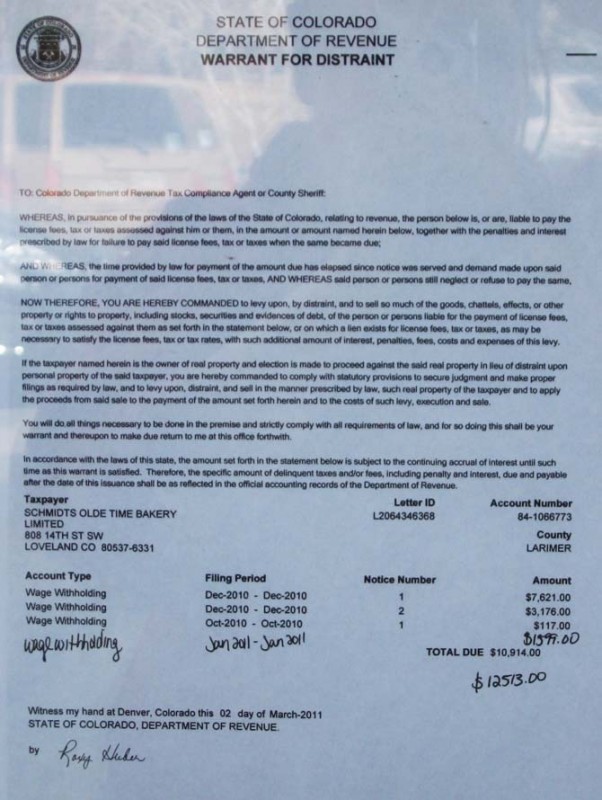