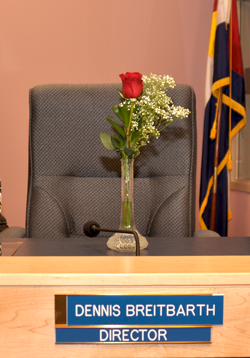 [1]Wednesday’s Thompson Board of Education meeting began on a very special note. Quite apparent was the empty chair where Dennis Brietbarth normally sat. Also noticeable was the single rose, placed there by members of the Thompson Education Association. Seeing the head of the teacher’s union with tears in her eyes over the loss of a school board member speaks volumes about the man and his relationship with the teachers of the Thompson School District.

Board president Lucille Steiner was scarcely able to hold back her own tears as she spoke about Brietbarth’s commitment to community service and his passion for education. She finished her comments by saying, “His shoes will be difficult to fill. We will miss him greatly.”

Director Leonard Sherman described him as a multitalented Renaissance man who was warm hearted and lived a life of service to others. Each of the directors evoked warm memories of his commitment to the school district and his personal help to them. Superintendent Cabrera described the board as being like a family and losing a member was like losing a family member. “Dennis was a good man in every sense of the word,” he said

It was obviously a difficult and emotional time for the board and many in the room.

Steiner asked for a minute of silence to honor Brietbarth before proceeding with the evening’s agenda.

Dr. Ron Cabrera, Superintendent of Schools, announced that this was the first day that all students were back in school and every one was excited.

The only action items before the board were on the consent agenda, which the board approved. Items included approval of revisions to the Weapons in School and Distribution of Materials to Students policies. One of the items was a resolution declaring a vacancy for Board of Education Director; District B. Steiner said “It seems somewhat cold to do this,” but she pointed out that statutes require that they do this and she did not want it to appear that there was any disrespect for Dennis Breitbarth.

Deputy Superintendent, Dr. Judy Skupa, briefed the board on the results of the CSAP, ACT and the Adequate Yearly Progress (AYP) reports that are a part of the No Child Left Behind program. These assessments quantify the proficiency of district students in core areas. The District ranks high, but it goals for next year are higher. Lowest of the areas was in writing skills. Director Lola Johnson made the point that writing was one much higher, but the shift in emphasis to math, while increasing math proficiency, seems to have been done at the expense of writing proficiency.

Dr. Skupa also briefed progress on the district’s strategic plan for the next 10 years. The plan includes five core values: Integrity, visionary Leadership, personal learning, social contribution and continuous improvement. More about the plan can be found on the district web site [2] under “About Us.”

The board also discussed drafting a resolution in opposition to ballot initiatives, Amendment 60, Amendment 61 and Proposition 101. Steiner said the proposals together would reduce district funding by 45%. Karen Stockley, who is also a candidate for the Colorado House District 49 seat, said she feels the Board of Education is and should be non-partisan and she would usually not recommend such action. However, she felt these issues would “Cripple education in Colorado,” and she would support such a resolution. Director and former Berthoud High School Principal, Leonard Sherman said, “These measures are meant to stifle and starve government at the local and state level. I don’t thing that this district, or any district, will be able to accomplish the basic education of kids.”

The consensus of the board was to bring the resolution for a vote at the September 1 meeting.