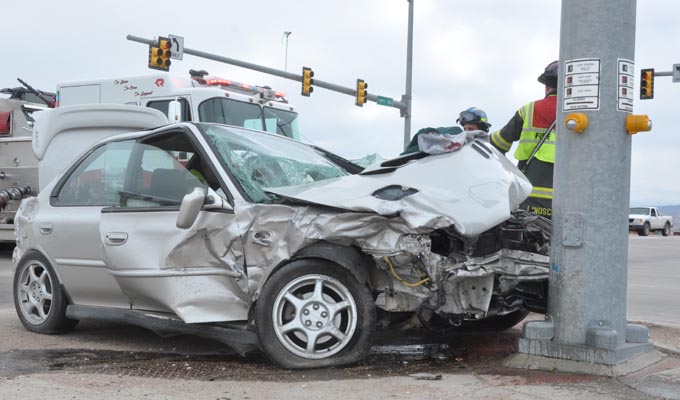 Demolished Subaru at the northeast corner of the intersection of US Highway 287 and Mountain Avenue.

Berthoud emergency personnel responded to a report of a four-car motor vehicle accident on US Highway 287 at State Highway 56 on Wednesday afternoon. The accident happened a few minutes before 4 p.m. and scattered car parts and broken glass over a wide area of the usually busy intersection.

Keith Burgess had a ringside seat for the accident. Burgess was sitting at the signal waiting to cross Highway 287 westbound. Burgess said, “Suddenly I saw two cars coming at me. I thought they were going to hit me and I ducked.

Burgess said he was the first person to check on the vehicle occupants. He was quite concerned about the woman driving the Mini Cooper. He said she was very disoriented and kept losing conciseness. He found the driver of the Subaru was bleeding and applied pressure to cut the blood loss until the medics arrived, but thought he was perhaps in better condition that the other driver.

Everything happened so quickly that Burgess did not see the events leading to the crash. Another bystander said he had been driving along side the Mini northbound when he saw the Subaru enter his field of vision and he “slammed on the brakes.” While he could not be certain of where the Subaru came from, he thought it was southbound and turned left in front of them.

It appeared that the Mini Cooper struck the Subaru at the right front and it then hit the light pole. The Mini ended up facing eastbound and made some contact with the vehicle sitting in the left turn lane.

Both drivers were injured and the Thompson Valley Emergency Medical Service medics, with the assistance of Berthoud Firefighters, were very cautious in removing them from their vehicles. Both drivers were fitted with neck braces before being removed and placed on stretchers for transport.

Berthoud Fire stayed on scene to sweep up the considerable debris