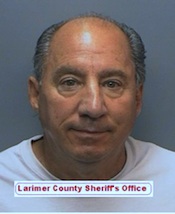 Mr. Cipolla is alleged to have sexually assaulted a teenage girl over a period of several years. He is charged with:

He is currently being held at the Larimer County Jail on a $1 million bond.