[1]Investigators from the Larimer County Sheriff’s Office continue to seek assistance from the public regarding a missing persons case that was initiated on October 12, 2010. John Marks, Jr. and Kathy Adams shared a residence located at 2920 1/2 East Mulberry in unincorporated Larimer County. Deputies responding to a welfare check at that address in the early evening hours of October 12, 2010, observed suspicious circumstances in the home that lead investigators to believe foul play occurred. The Larimer County Sheriff’s Office will not comment on what was found to maintain the integrity of the case. 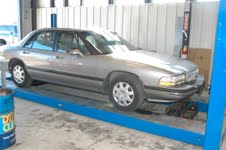 [2]On October 13, 2010, a 1995 silver four-door Buick LaSabre was found by LCSO investigators at a motel located at I-25 and Colorado Highway 119 in Weld County. Investigators believe this was the vehicle last driven by John Marks, Jr. and Kathy Adams.

[3]Anyone with information regarding this case or who may have seen John Marks, Jr., Kathy Adams, or the 1995 Buick should contact the Larimer County Sheriff’s Office at 970-416-1985 and are to ask for Investigator John Newhouse.

Once again, this is an active investigation and absolutely no further information will be released other than what is above.