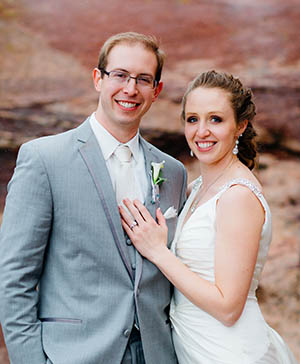 Tycee Shipley and Joseph Hanning were married in the gently falling snow on April 20, 2016, at Red Rocks Park in Morrison. The ceremony was officiated by the Rev. David Melson of Resurrection Fellowship.

The bride is the daughter of David and Jayme Shipley, of Berthoud. She earned her bachelor of science in Mechanical Engineering from the Colorado School of Mines. She is employed by British Petroleum in Indiana.

The maid of honor was Kayla Mathews. Bridesmaids were Emily Brookes, sister of the groom; Kelsie Dodson and Andrea Rivera. The flower girl was Aurora Shipley, niece of the bride.

The best man was Blake Waldie. Groomsmen were Tyler Hillenbrand, Andrew Nawrocki and Casey Randolph. The ring bearer was Declan Shipley, nephew of the bride.

The couple honeymooned in Barcelona, Spain. They now reside in Valparaiso, Indiana.