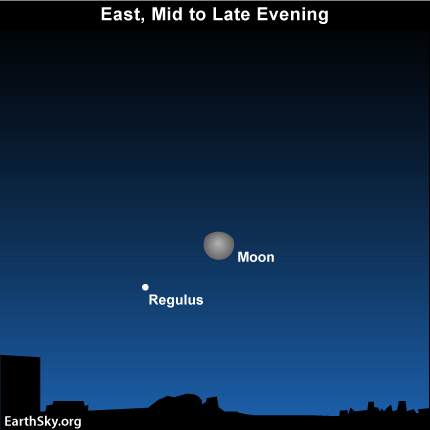 If you are out late on this Friday evening, look toward the east to see the moon near the star known as the Lion’s Heart. This is Regulus, brightest star in the constellation Leo the Lion.

Although our sky chart is designed for mid-temperate North American latitudes, the moon and Regulus can be seen late tonight from all around the world. Simply look for the closest bright light to the big and bright waning gibbous moon [5]. The bright star nearby is Regulus.

After they rise tonight, Regulus will chase the moon westward across the sky. This star and the moon will climb highest up in the sky several hours after midnight. That is close to dawn for mid-temperate latitudes in the southern hemisphere.

What is the bright object up before dawn in December? [8]