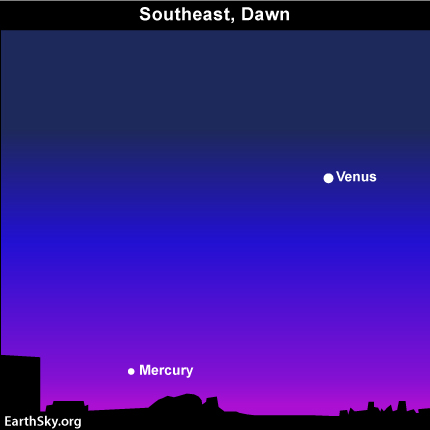 Tomorrow – on Sunday, January 9, 2011 – the planet Mercury swings to its greatest distance west of the sun as seen in Earth’s sky. That means people around the world with a level horizon and a clear sky can view Mercury climbing over the eastern horizon just as darkness gives way to dawn. If you don’t see Mercury right away, wait for this world to climb higher into the sky. Mercury should be in view by at least one hour before sunrise.

Use the planet Venus, the brightest star-like object in all the heavens, to locate Mercury close to the horizon. As seen from middle and far northern altitudes, Mercury is found to the lower left of Venus. Near the equator, Mercury sits pretty much straight below this dazzling planet. At middle latitudes in the southern hemisphere, seek for Mercury to Venus’ lower right.

Mercury shines as brilliantly as a first-magnitude star, but the haze near the horizon and the twilight glare may make Mercury difficult to see with the unaided eye. In this case, try your luck with binoculars – the most underrated tool in sky gazing. Many a time binoculars have enabled me to see Mercury when it was otherwise invisible.

Do not give up if you miss seeing Mercury tomorrow. It will remain in good view in the morning sky for at least another week. Take advantage of your opportunity to catch Mercury, the solar system’s innermost planet, while it hovers close to its greatest morning elongation point!