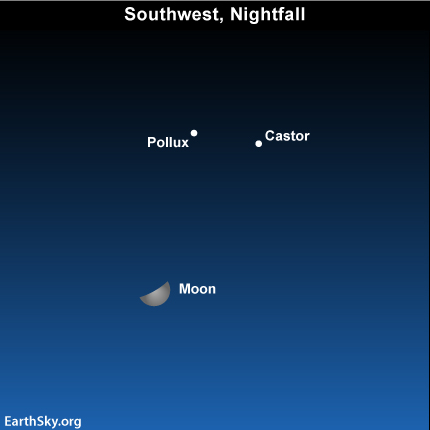 [3]Tonight the wide waxing crescent moon [4] passes in front of the constellation Gemini the Twins. The two brightest stars in Gemini are Castor and Pollux. Beyond the fact that both are bright, they don’t really look alike. Pollux [5] is golden in color, and Castor [6] is pure white.

These stars are extremely noticeable in the night sky. No other two such bright stars appear so close together. Of course, many myths explain their proximity. In most cultures, these two stars were seen as twin stars, usually as heroes.

In Greek and Roman mythology, Castor and Pollux were the twin sons of Jupiter and Leda and brothers of Helen of Troy. They sailed with Jason as two of his Argonauts.

Pollux, represented by the brighter star, was immortal, but his brother Castor was not. When Castor was killed in a fight, Jupiter wanted the two to remain together, so he decreed that they each should spend some time in the underworld and some time in the heavens. This is a fanciful way of explaining why the constellation is above the horizon for part of each day and below the horizon for the rest. Castor and Pollux are sometimes said to represent brotherly love.

Where is the ecliptic in relation to the Milky Way? [7]

Meanwhile, in China, these two stars were associated with water, as part of constellations representing rivers. They were sometimes also seen as the complementary elements of yin and yang [8].

So look for tonight’s moon and contemplate the Gemini Twins! They will become your friends for life.