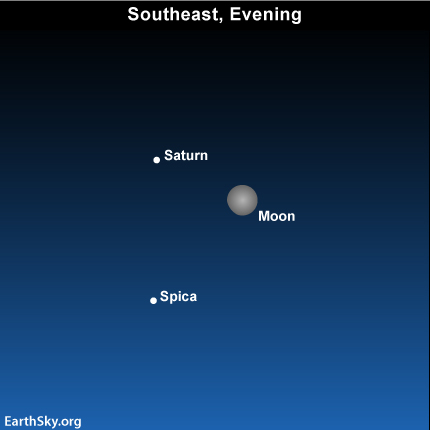 [3]Go out at nightfall and look to the east, and you will see the beautiful planet Saturn. It’ll be the star like object close to tonight’s almost-full waxing gibbous moon [4]. Note Saturn’s golden color, if you can. If you can’t, try viewing this world through binoculars. Or better yet, look at Saturn’s golden color and glorious rings through a telescope.

That other bright light by the moon is Spica [5]; the brightest star in the constellation Virgo the Maiden. Look at this star closely with the unaided eye or binoculars and note its blue-white color. Although Saturn and Spica will remain fairly close to each other for the rest of this year, remember that Saturn is the golden “star.”

Our solar system’s biggest ring yet found around Saturn [6]

By about midnight, Saturn will be high in the southern heavens. What makes April 2011 so special for viewing Saturn? Tonight Saturn is only a few weeks past its April 3 opposition to the sun. Unlike the obstinate defiance of an argumentative two-year-old, opposition is a good quality in a planet . . . albeit a quality that is only temporary. Since a planet at opposition is essentially opposite the sun, it is available for viewing all night, just as the sun is seen all day. And the orbital geometry demands that while in opposition, the planet is also at – or nearly at – its closest to Earth.

Of course, opposition is nothing special to Saturn. All outer planets reach opposition about once a year, except for fast Mars. Mars takes longer – about 780 days – but for the much farther distant and slower-moving planets, it’s little more than a year. For Jupiter, it is 398 days, whereas for Saturn it is just 378 days.

Actually, Earth’s motion around the sun – in our smaller, faster orbit – is what brings Saturn to this place in our sky at the same date plus roughly two weeks each year. (In 2012 Saturn’s opposition will fall on April 15.)

Saturn is closer to us tonight than it’ll be for the rest of this year. Hence its brightness.

What makes a halo around the moon? [8]