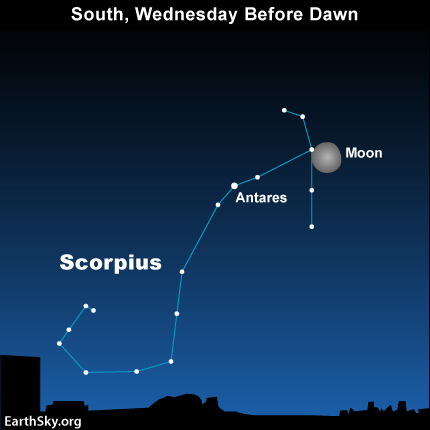 Antares: Heart of the Scorpion [4]

This evening, the waning gibbous moon [8] will precede Antares into the southeast sky by about an hour. Tomorrow, a somewhat smaller waning gibbous moon will rise more or less with Antares. The moon and Antares will rise late on both nights. They will cross the sky westward together, and hover in the southwest sky at morning dawn.

By late May and early June, Betelgeuse will have disappeared from the evening sky, whereas Antares will shine from dusk until dawn!

Orion descends in the west each evening [11]

Star hopping from the constellation Orion [12]

Astronomy Picture of the Day from NASA/JPL [14]