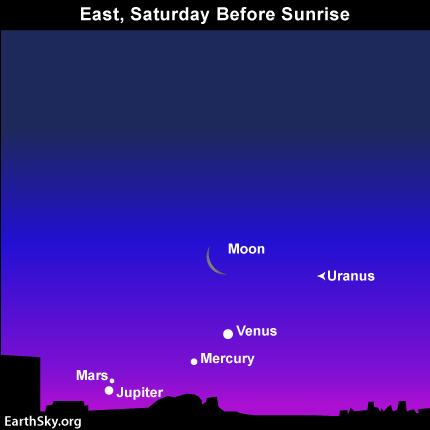 [3]We show the moon and planets for about 30 minutes before sunrise tomorrow (Saturday, April 30) as seen from North American mid-northern latitudes. At mid-northern latitudes all around the world, the only two worlds that you are likely to see before sunrise tomorrow are the moon and blazing planet Venus. Look for them low in the east some 60 to 30 minutes before sunup. Binoculars might enable you to see fainter Mercury in the same binocular field with Venus.

Far and away, people in the southern hemisphere enjoy the better view of this string of planets. The planetary line-up stands tall and upright in the southern hemisphere, with these planets rising before dawn in that part of the world. At our northern latitudes, these planets tend to line up sideways across the sky, which keeps these worlds submerged in the glow of morning twilight.

In both hemispheres, the order of the planets [4] remains the same. Uranus [5] resides at the top and Jupiter sits at bottom. Uranus rises first, followed by Venus, then Mercury, then Mars and Jupiter [6].

Given an unobstructed eastern horizon, southern hemisphere viewers will have a good chance of seeing three planets with the eye alone an hour or more before sunup: Venus [7], Mercury, and Jupiter. Jupiter ranks as the second brightest planet, after Venus. Mercury is the third brightest, followed by Mars and then Uranus. Binoculars (or a low-powered telescope) may show Mars next to Jupiter. Certainly, an optical aid and possibly a detailed sky chart will be needed to see Uranus.

By the way, the order of the planets going outward from the sun is Mercury, Venus, Earth, Mars, Jupiter, Saturn, Uranus, and Neptune. First, locate the two most brilliant worlds – the moon and Venus – then search for the more obscure ones with the naked eye or binoculars.

Ten things you may not know about the solar system [4]