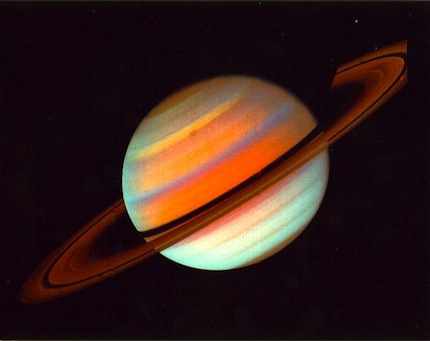 [3]The best time of 2011 to see Saturn is here. Planet Earth flies between the sun and Saturn tonight, according to U.S. clocks. Our fast movement in orbit brings us between Saturn and the sun every year, to an event called opposition by astronomers. In other words, Saturn is now opposite the sun in Earth’s sky.

At opposition, Saturn rises in the east at sunset and sets in the west at sunrise. So Saturn is up all night, well placed for viewing. Opposition also brings Saturn closest to Earth for all of 2011. As a result, Saturn is now shining most brilliantly in our sky.

If you had a bird’s-eye view of the solar system today, you would see our planet Earth passing in between the sun and Saturn. You would see the sun, Earth, and Saturn lining up in space. Only the planets that orbit the sun beyond Earth’s orbit can ever reach opposition – that is, be opposite the sun in Earth’s sky. The inner planets – Mercury and Venus – can never be at opposition, because they orbit the sun inside Earth’s orbit.

All the planets farther from the sun reach opposition every time our swifter-moving planet sweeps between the sun and them. Saturn [4], the 6th planet outward from the sun, is the most distant world that’s easily visible to the unaided eye. The ringed planet returns to opposition about 2 weeks later every year.

So that is Saturn at opposition tonight. Shining in the east at nightfall, Saturn looks like a respectably bright steady star. Saturn climbs upward throughout the night and ascends to its highest point at midnight. When it is high in the sky, where Earth’s turbulent atmosphere thins out and settles down, telescope users can view Saturn’s glorious rings.