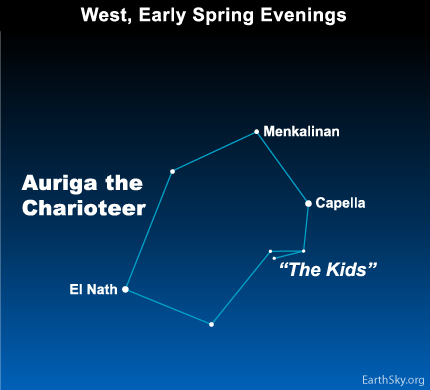 [3]As darkness falls, there are several ways to distinguish the brilliant star Capella from the other bright stars in the western half of the sky. Capella, the northernmost first-magnitude star, is the farthest bright star to your right as you are facing west. In addition, Capella [4] looks yellow, like our sun. Moreover, Capella has a famous trio of starlets accompanying her, dubbed “The Kids.”

Capella: Stellar beacon of the Charioteer [4]

At nightfall and evening tonight – Friday, April 8, 2011 – you can use the moon (outside the boundaries of tonight’s sky chart) to locate Capella. As you are facing west, Capella sparkles about two fist-widths to the upper right of tonight’s waxing crescent moon [5]. Hold your fist an arm’s length away from your eye.

This beacon star, high up in the west at nightfall, plunges downward as evening deepens, and hovers close to your northwestern horizon by midnight. Capella is the brightest luminary in the constellation Auriga the Charioteer. In star lore, this pentagon-shaped figure portrays a mythological personage riding a chariot. In some versions, this is Poseidon – the god of the sea – driving the chariot. In other versions, it is Erichthonius, the ancient king of Athens.

Speaking of Athens, it was here that Poseidon and the goddess Athena quarreled for possession of the city. The other Olympian gods, fearing a destructive struggle, intervened. They decided to hold a contest, proclaiming that the one who could give the better gift to humanity would be the patron god (or goddess) of Athens. Poseidon struck the ground with his trident, creating the horse. Athena struck the ground with her spear, and up sprang the olive tree [6].

The Olympians judged Athena the winner, so the city was named after her.