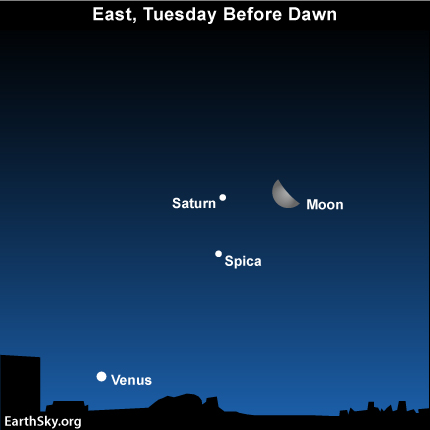 You might be seeing these objects when there is a fair amount of predawn twilight washing the sky. The planets and stars have colors of their own. Saturn is golden, and Spica is blue-white. If you cannot discern their colors, trying looking at these orbs through binoculars.

Our chart is for North America (it’s centered on Kansas, in fact). However, people are surprised to find that all of us – around the globe – have much in common when it comes to looking at the night sky. It is all one sky, after all. That is why – before dawn tomorrow – everyone around the world (with clear skies) should be able to see Saturn and Spica near the moon, and Venus lower down in the eastern sky.

From different parts of the globe, the orientation of these objects with respect to the horizon will be different. The patterns in the sky do not change much. Sometimes, as in the case of stars, they do not change at all over the scale of human life spans. However, our vantage point on these sky patterns does change. Here, at our more northerly latitudes, we see Venus to the lower left of the moon, Saturn and Spica. Near the equator, Venus is found pretty much below the moon, Saturn and Spica. At mid-temperate latitudes in the southern hemisphere, Venus sits to the lower right of the trio.

For the rest of December 2010, watch the waning (shrinking) moon sink lower into the predawn sky day by day. On Wednesday, December 29, look for the waning crescent moon to pass quite close to Spica, which is the brightest star in the constellation Virgo the Maiden. By Thursday, December 30, the moon will move in between Spica and Venus.

However, the biggest morning attraction waits for the last day of 2010. That is when the moon and Venus will pair up together in the dawn and predawn sky. They will be a lovely sight, and a glorious way to end the year. Watch for them.