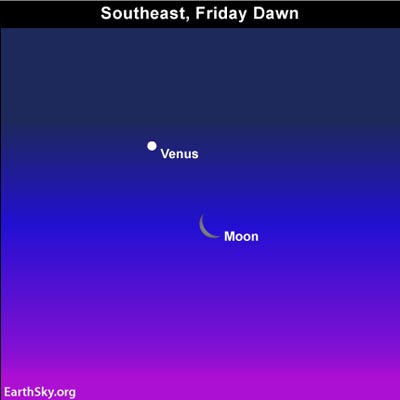 [3]The final morning of 2010 – tomorrow morning, December 31 – will feature the moon with the planet Venus in the eastern sky before sunrise. It should be quite a treat, because the moon and Venus rank as the second- and third-brightest celestial bodies in Earth’s sky.

Depending on where you live worldwide, Venus and the moon will rise above the eastern horizon some 3 to 4 hours before sunup, to light up the wee morning hours until daybreak.

If you look at Venus before dawn with a telescope, you will see this planet shining as a wide waxing crescent. Tomorrow, Venus’ daylight side will cover somewhat more than 45% of the Venusian disk. Venus will reach its half-illuminated first quarter phase on January 8, 2011.

Unlike Venus, whose phase is waxing (increasing), the lunar crescent is waning (decreasing) in the morning sky. Look along the moon’s terminator – the shadow line dividing the lunar day from the lunar night – with binoculars or the telescope. The interplay of light and shadow along the terminator highlights the craters, mountains and valleys on the lunar terrain.

The moon and Venus shine by reflecting sunlight. Like here on Earth, these two worlds are always half-illuminated in sunlight and half-immersed in shadow. Yet, the portion of the daylight side that faces Earth keeps changing, so that’s why the moon and Venus exhibit the full range of phases.

Tomorrow, on December 31, watch for the waning crescent moon and the waxing crescent Venus to light up the dawn and predawn sky!