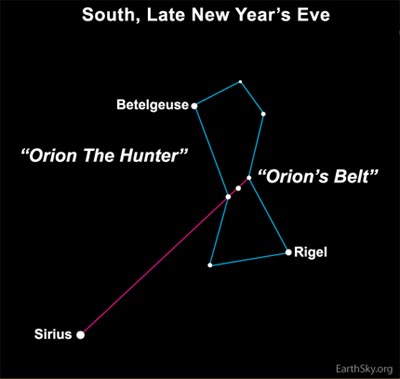 [3]Sirius [4] in the constellation Canis Major – the legendary Dog Star – should be called the New Year’s star. This star – the brightest star in our sky – celebrates 2011 and every new year by reaching its highest point in the sky around the stroke of midnight.

How can you find Sirius? It is easy because this star is the brightest one we see from Earth. Its name means ‘Sparkling’ or ‘Scorching.’ In late 2010 and early 2011, only the planet Jupiter outshines Sirius in the evening sky. You won’t confuse them. Jupiter will shine in the south to southwest as Sirius is ascending in the southeast in mid-evening.

If you are not sure, look for the prominent ‘Belt’ stars of the constellation Orion, as shown on today’s chart. Orion’s Belt always points to Sirius.

Sirius is highest in the sky at midnight every New Year’s. Astronomers call this a ‘midnight culmination’ of Sirius. Midnight culmination for Sirius comes tomorrow night, but tonight it is nearly the same. As the New Year rings in, Sirius is at its highest.

Look for Sirius – at midnight culmination tomorrow – highest in the sky around midnight every New Year’s Eve!