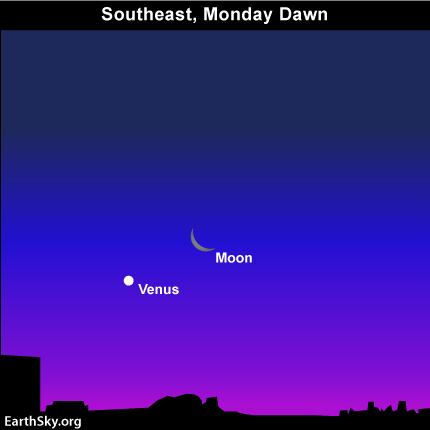 [3]If it is clear in the wee hours before sunrise on February 28, there is no way that you can miss the waning crescent moon and the dazzling planet Venus in the east or southeast sky. After all, the moon and Venus rank as the second- and third-brightest heavenly bodies, respectively, after the sun.

From middle latitudes in the northern hemisphere, the moon and Venus will rise about 2 hours before the sun tomorrow. You cannot miss them if you rise early.

Catch these two “upright” worlds – the moon and Venus – in the dawn and predawn hours on February 28, 2011!