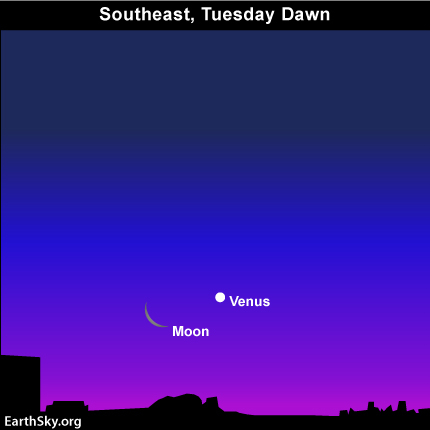 [3]Our sky chart shows the waning crescent moon [4] and the brightest planet Venus for about an hour before sunrise on March 1.

We are showing mid-northern latitudes, like those in the U.S. As seen from the world’s eastern hemisphere – Europe, Africa, the Middle East, western Asia, Indonesia, Australia and New Zealand – the moon and Venus pair up even more closely together than they do in the Americas.

In the Middle East and western Asia in particular, the moon and Venus come within a hairsbreadth of touching one another on the sky’s dome. However, from everywhere worldwide, the glorious morning couple graces the dawn and predawn sky.

The moon’s northern axis tilts about 1.5 degrees out of perpendicular to the ecliptic, whereas Venus’ southern axis tilts less than 3 degrees from straight up-and-down. A planet’s or any moon’s northern axis belongs to the hemisphere that rotates counter-clockwise, and the southern axis belongs to the hemisphere that rotates clockwise. Depending on your perspective, the moon stands on its head while Venus stands on its head – or vice versa.

Whatever your perspective, be sure to watch nighttime’s two most brilliant celestial bodies – the moon and Venus – lighting up the dawn and predawn hours on Tuesday, March 1.