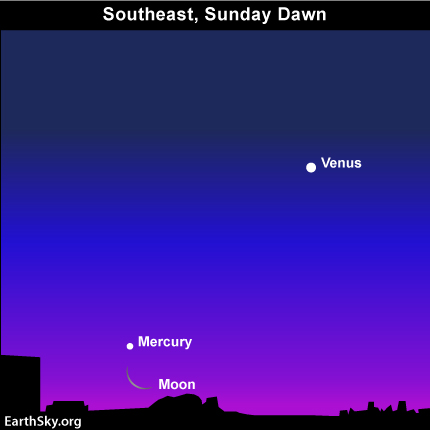 [3]If you rise shortly before sunup tomorrow (Sunday, January 2), you might catch the waning crescent moon [4] and elusive planet Mercury below brilliant Venus. Look in the direction of the sunrise – but an hour or more before the sun comes up.

You will need a clear view of the sky, because any obstructions such as mountains or trees will hide the moon and Mercury from view. Venus should be visible, though, since it is higher in the dawn and predawn sky.

If you have a clear sky, you cannot miss Venus. It is the third-brightest object to light up the heavens, after the sun and moon.

Although Mercury shines as brilliantly as the brightest stars visible in Earth’s sky, it is not always easy to spot Mercury with the unaided eye. Thus, this planet has earned its reputation for being elusive. Its brightness is not the issue. The issue is that Mercury – the solar system’s innermost planet – always stays near the sun in our sky. Therefore, it is often low in the sky at sunrise or sunset, subject to haze and murk near the horizon, plus the twilight glare. Binoculars will increase your chances of spotting Mercury by leaps and bounds, so dust them off and use them!

The moon’s position relative to Mercury also depends on where you live worldwide, but now we are not talking north-south. Instead, now we are talking east-west. In the Americas, the moon and Mercury cozy close enough together to fit inside a single binocular field. Elsewhere, the moon still shines near Mercury, even though the two probably will not be close enough to squeeze into one binocular field together. Why not? Remember, the moon is always moving in orbit around Earth. As Earth spins, bringing the moon into view Sunday morning, its movement in orbit will carry it closer to, or farther away from, Mercury – depending on your east-west location on the globe.

That will be tomorrow, at early Sunday dawn. Venus will be relatively high in the east or southeast, with the moon and Mercury over the sunrise point on the horizon.