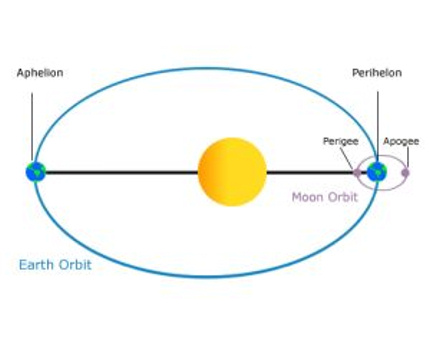 [3]When 2011 began on January 1, our planet Earth was very close to its perihelion – its closest point to the sun for the year. That closest point will come tomorrow. In 2011, Earth will be closest to the sun on Monday, January 3 at 19 hours Universal Time (12 p.m. Mountain Time).

How do I translate Universal Time to my time? [4]

Though not responsible for the seasons, Earth’s closest and farthest points to the sun do affect the lengths of the seasons. When the Earth comes closest to the sun for the year, as now, our world is also moving fastest in orbit around the sun. Earth is rushing along now – moving about a mile per second faster than our average speed in orbit of 18 miles per second. Thus, the northern hemisphere winter – and southern hemisphere summer – is the shortest season as Earth rushes from the winter solstice in December to the March equinox.