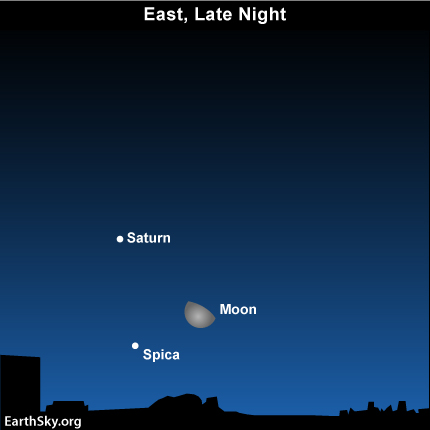 No matter where you live, you will have to wait until late night to spot the moon, Saturn [6], and Spica [7] low in your eastern sky.

After rising, the trio climbs upward in the eastern sky together during the wee hours after midnight. They reach their high point in the sky around 5 a.m. local clock time. It is easier to view Saturn’s rings through a telescope when this planet is higher in the sky. So if you have a telescope, pull it out before dawn and aim it in this direction.

You can distinguish the planet Saturn as the star like object that shines steadily. You can also tell Saturn from the star Spica by color. Saturn appears golden while Spica shines blue-white. If you cannot discern color because of tonight’s moonlit glare, let binoculars show you the colors of these celestial gems.

The moon swings by Saturn for only a day or two each month. It is an excellent guide, at such times, to the planet. However –this year – once you learn how to locate Spica, Virgo’s brightest star, you will have a relatively fixed guide to Saturn. The ringed planet will shine in front of Virgo and near Spica throughout 2011.