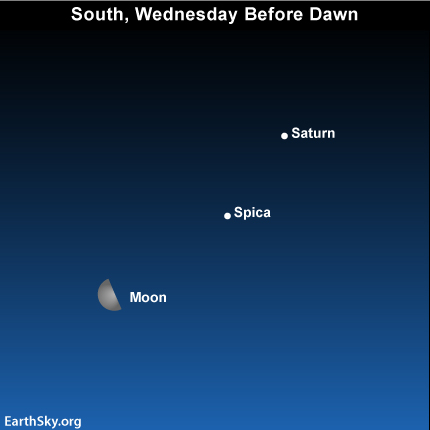 [3]The last quarter moon [4] and the planet Saturn will shine on opposite sides of the bright star Spica before sunrise tomorrow (January 26). As seen from the northern hemisphere, the trio will appear southward before dawn.

Everyone around the world tomorrow will see the moon and Saturn in front of the constellation Virgo, with Spica – Virgo’s brightest star – shining in between the moon and Saturn. However, that does not mean everyone will see the moon at the instant of last quarter moon. As seen from Europe, Africa, and Asia, it will still be a rather slender waning gibbous moon [8] that lights up tomorrow’s morning sky. By the time that the moon reaches last quarter phase, it will have set beneath their western horizon.

For the most part, this sky show is a morning attraction. Watch for the moon and Saturn to flank the star Spica in the dawn and predawn sky on Wednesday, January 26!