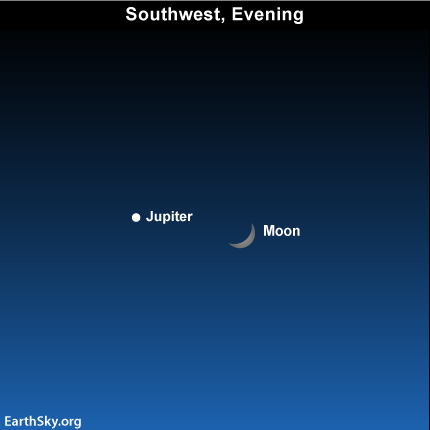 [3]The first two celestial objects to pop out at evening dusk are the waxing crescent moon [4] and the dazzling planet Jupiter. The moon and Jupiter rank as the brightest and second brightest heavenly bodies in the evening sky, respectively.

As seen from all around the world tonight, Jupiter will set pretty much due west, at roughly 10:30 p.m. local time (11:30 p.m. local daylight saving time). Even though Jupiter sets at nearly the same hour worldwide, this world stays out much later after dark in the northern hemisphere. That is because the January sun sets so much earlier at more northerly latitudes, yet so much later at more southerly latitudes.

No matter where you live, however, look for the moon and Jupiter to adorn tonight’s evening sky!

What is the bright object up before dawn in January? [5]