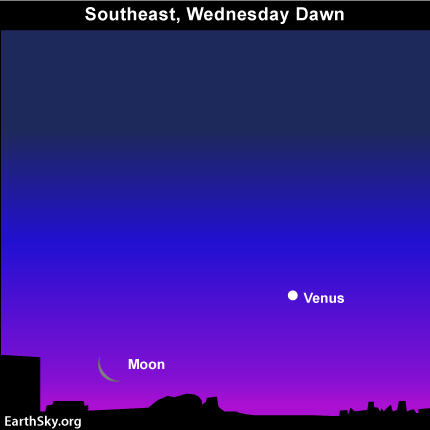 [3]The thin crescent moon still shines near Venus, the sky’s brightest planet, at morning dawn on Wednesday, March 2. However, you will need a level and unobstructed horizon to catch the moon and Venus low in your east-southeast sky. Look for them over the horizon about 75 to 60 minutes before sunup.

Venus, the 2nd planet outward from the sun, orbits the sun one step inward from Earth. Because Venus’ orbit lies inside of Earth’s orbit, we see Venus going through the full range of phases in our sky. However, you need a telescope to see Venus’ phases. At present, Venus exhibits a waxing gibbous phase, and is nearly 72% illuminated in sunshine. By the end of the month, Venus will be 80% illuminated.

Venus is well known for its 8-year cycles. Eight years from now – on March 2, 2019 – Venus will return to almost the same exact spot in front of the backdrop stars, shining – once again – at the Sagittarius/Capricornus border.

Look for the moon and Venus low in the east-southeast before sunrise.


Astronomy Picture of the Day from NASA/JPL [4]