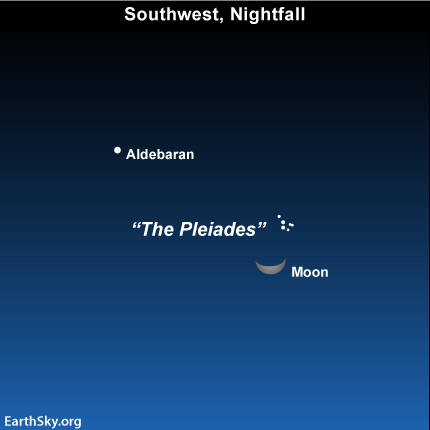 [3]The waxing crescent moon [4] shines in the vicinity of the Pleiades star cluster tonight. On the other hand, if you live in the eastern part of the globe –Asia, Indonesia, Australia, or New Zealand – you will see the moon closer to the Pleiades tomorrow night.

On a dark night, most people see the Pleiades cluster as a tiny dipper-shaped formation made of six little starlets. That lost seventh star – the missing Pleiad – is the stuff of myth and legend.

In both hemispheres, the moon and Pleiades will set in the west-northwest part of the sky.

Aldebaran: Fiery eye of the Bull [7]