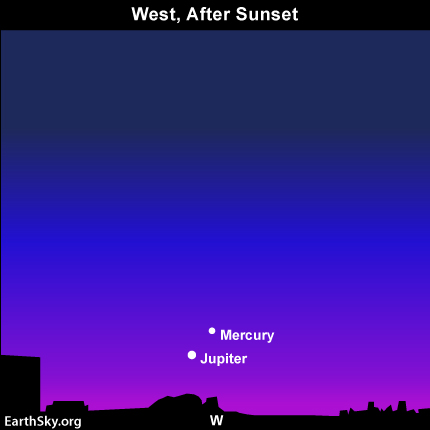 [3]The planets Mercury and Jupiter meet up for a conjunction today. Conjunction means that these two worlds stand north and south of one another in right ascension. (Right ascension on the sky’s dome is the equivalent of longitude here on Earth.) Mercury swings north of Jupiter at 17 hours Universal Time [4] (12:00 noon Central Daylight Time) on March 16.

In the Americas, this conjunction takes place during the daylight hours today. Nonetheless, Mercury and Jupiter will still be close together when they pop out in the western sky after sunset. In fact, both planets will easily fit inside the same binocular field of view. But start your search at least 45 minutes after the sun goes down, for these two worlds will follow the sun beneath the horizon about 75 minutes after sunset (at mid-northern latitudes).

Although Jupiter outshines Mercury, Mercury is the closer planet to Earth. Mercury – the solar system’s innermost planet – presently resides at about the same distance that the sun does from Earth. However, Jupiter, the fifth planet outward from the sun, now lodges at nearly six times the sun/Earth distance from us. Even so, the telescope shows Jupiter’s apparent diameter exceeding that of Mercury by about five times. Moreover, Jupiter’s cloud cover more effectively reflects sunlight than does Mercury’s rocky surface. Adding everything up, that makes Jupiter the far brighter world in Earth’s sky.

Mercury, the smallest planet, and Jupiter, the largest, remain close enough together to occupy a single binocular field for the next several days. Watch at evening dusk, as Mercury climbs away from the glare of twilight and Jupiter falls into it.