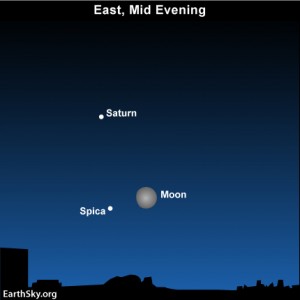 [3]The March equinox happens today at 23:21 Universal Time [4], which is 17:21 (5:21 p.m.) Mountain Daylight Time for us in the U.S. The March equinox [5]signals the beginning of spring in the northern hemisphere and autumn in the southern hemisphere. It marks that special moment when the sun crosses the celestial equator going from south to north.

How do I translate Universal Time into my time? [4]

Celebrate the change of seasons, by watching the moon team up with the star Spica [6] and the planet Saturn [7] tonight. Spica is the brightest star in the constellation Virgo the Maiden. 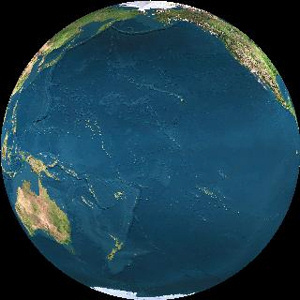 [8]
Earth, as seen from the sun, on March equinox

Graphic on right from Earth and Moon Viewer [8]

Our ancestors could not have understood the equinoxes as we do. They did not understand them as events that occur in the course of Earth’s yearly orbit around the sun. But if they were observant . . . and some were very observant indeed . . . they surely marked today as being midway between the sun’s lowest path across the sky in winter and highest path across the sky in summer.