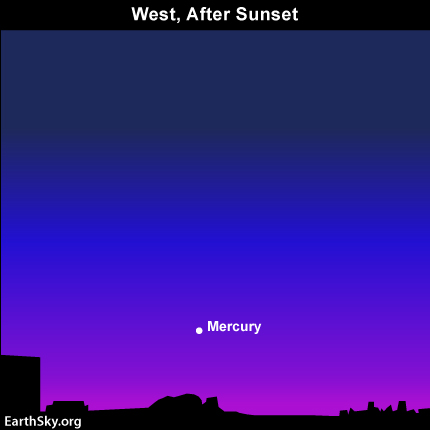 [3]After the sun sets, you can see the elusive planet Mercury – and the even more elusive zodiacal light – in the western sky. For those living in the northern hemisphere, this next week presents the best chance in all of 2011 to see Mercury, the solar system’s innermost planet. Meanwhile, if you have a very dark sky, the zodiacal light can be seen in the west about an hour after sunset through March and April.

Everything you need to know: zodiacal light or false dawn [4]

To find Mercury, look west (the direction of sunset) about 45 to 75 minutes after the sun goes down. Mercury shines as brightly as a 1st-magnitude star, but its luster is somewhat tarnished by the twilight glare. If you cannot see Mercury with the eye alone, then try binoculars. At mid-northern latitudes, Mercury sets about 90 minutes after the sun.

You will not see the zodiacal light until the sky is completely dark, so Mercury will be setting as this astronomical wonder comes into view. You need a sky free of light pollution to spot the zodiacal light after all traces of twilight leave the western sky. 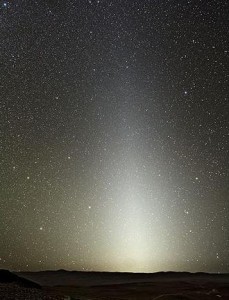 [6]Zodiacal light looks like a large but faint milky-colored pyramid of light with its apex reaching perhaps halfway up the sky. It is caused by sunlight reflecting off interplanetary dust particles that orbit the sun within the inner solar system. People at mid-northern latitudes can see the zodiacal light after dusk at present because the ecliptic – the plane of the solar system – hits the horizon at a particularly steep angle on early spring evenings. The farther south you live within the northern hemisphere’s temperate zone, the more likely you are to spot the zodiacal light.

The end of evening dusk (astronomical light) and the beginning of nighttime occur about 90 minutes after sundown. You must have a dark sky, far away from artificial lights, to see the soft glow of zodiacal light in the west at nightfall. Look about 90 to 120 minutes after sunset.