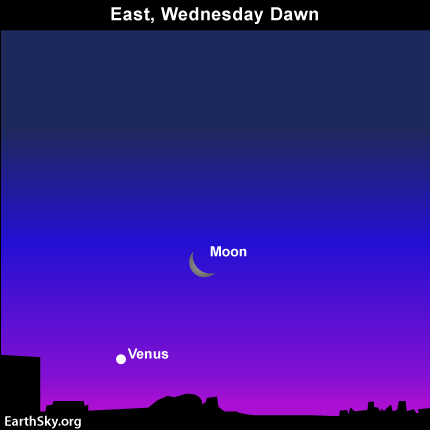 [3]As seen from mid-northern latitudes on Wednesday, March 30, the waning crescent moon [4] and the blazing planet Venus will be sitting low over the eastern horizon, starting around an hour before sunrise. Any obstructions – such as trees or houses – might block your view of Venus. The moon will be easier to spot because it will be higher up in the sky.

Everywhere worldwide, the moon will come up before Venus tomorrow morning. Then Venus will follow the moon above the eastern horizon. Once again, the moon will rise at an earlier hour at more southerly latitudes. So why will the moon and Venus rise sooner before sunrise in the southern hemisphere? It is because it is early autumn in that part of the world. In addition, on early autumn mornings, the ecliptic –the pathway of the moon and planets – hits the horizon at a particularly steep angle.