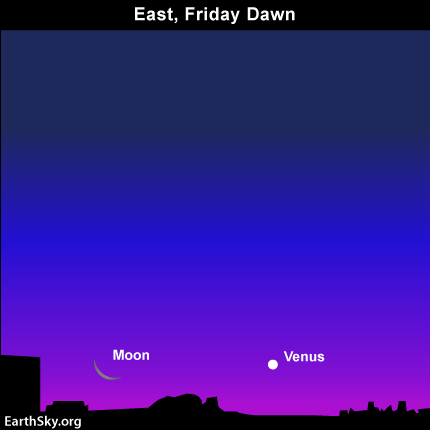 [3]Our sky chart shows the thin waning crescent moon [4] and the planet Venus for about an hour before sunrise tomorrow (Friday, April 1, 2011), as seen from middle latitudes in North America. Mid-northern latitudes all around the world will see the moon and Venus shining more or less side by side as well. You will want an unobstructed horizon in the direction of sunrise, because the moon and Venus will be sitting low in the eastern dawn.

However, no matter where you live, look for that super bright point of light by the moon, and that will be Venus. You cannot miss this dazzling world, for it is the third brightest celestial body to bedeck the heavens, after the sun and moon.

Because Venus, the second planet outward from the sun, orbits the sun inside of Earth’s orbit, Venus displays the full range of phases. Despite the fact that Venus – like the moon – waxes and wanes in recurring cycles, Venus’ brightness remains remarkably steady in Earth’s sky. That is because Venus swings closest to Earth when it is a thin crescent, but farthest away when it is at full phase. Venus now lodges on the far side of the sun, its disk about 80% illuminated by sunlight.

An hour or more before sunrise on April 1, look for the moon and Venus to be sitting side by side over the eastern horizon!